ICRC Director highlights implementation of agreements on cessation of fire 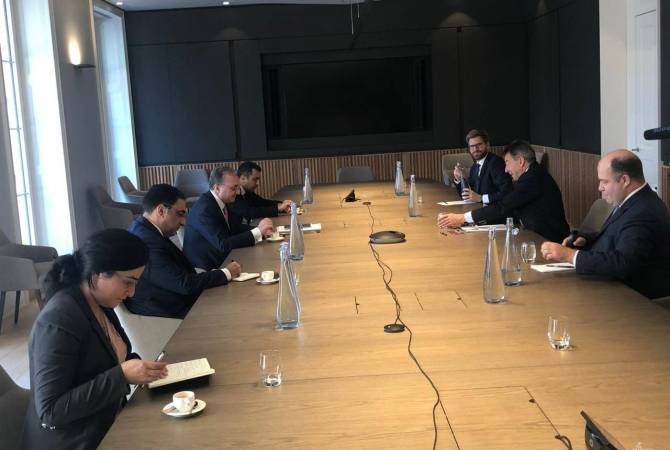 
YEREVAN, OCTOBER 30, ARMENPRESS. Foreign Minister of Armenia Zohrab mNatsakanyan met with Director of the International Committee of the Red Cross Peter Maurer in Geneva on October 30, ARMENPRESS was informed from the press service of the MFA Armenia.

The situation in Nagorno Karabakh (Artsakh) conflict zone resulted by the large-scale war unleashed by Azerbaijan was on the agenda of the meeting.

Zohrab Mnatsakanyan presented to ICRC Director Peter Maurer information about the war crimes committed by Azerbaijan against the people of Artsakh, as well as the gross violations by that country of the international humanitarian law, including the Geneva Conventions.

Minister Mnatsakanyan spoke about the deliberate targeting of the civilian population and infrastructures by the Azerbaijani armed forces, including with the use of international banned weapons. Mnatsakanyan also referred to the humiliating treatment, torture and murder of Artsakh’s civilians that have appeared under Azerbaijani control and war prisoners.

FM Mnatsakanyan emphasized that human rights and protection of the human rights are universal values, irrespective of the status of the given territory.

Referring to Turkey’s destabilizing policy in the South Caucasus and its ambitions to make the region a terrorist hotbed, the Armenian FM emphasized that Turkey’s direct involvement in the war unleashed by Azerbaijan and deployment of foreign terrorists from the Middle East is a serious threat to the regional and international security.

The sides emphasized the necessity of bringing to life the October 10, 17 and 25 agreements on immediate ceasefire, as well as the peaceful settlement of the conflict in the sidelines of the OSCE Minsk Group Co-chairs’ format.

Director of the International Committee of the Red Cross Peter Maurer highlighted the diplomatic efforts aimed at the implementation of the agreement on the ceasefire and the exchange of the bodies of the victims.