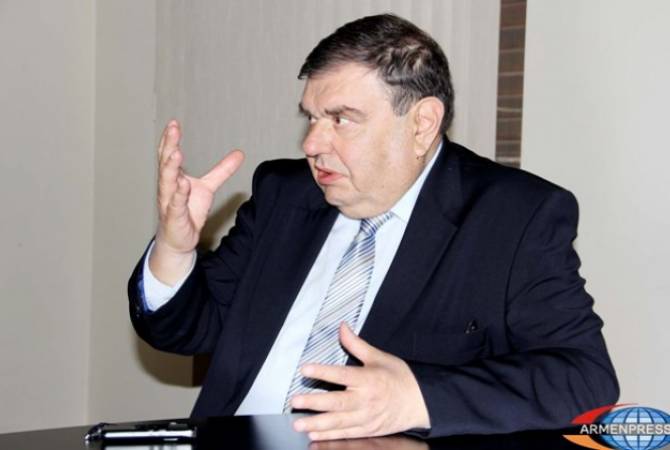 
YEREVAN, OCTOBER 30, ARMENPRESS. Turkey is the main factor in the failure of the third attempt to establish ceasefire in the Nagorno Karabakh conflict zone, Chairman of the European Armenian Federation for Justice and Democracy (EAFJD) Gaspar Karapetian told Armenpress, stating that Azerbaijani President Ilham Aliyev has no opportunity of making any decision, Turkish President Recep Tayyip Erdogan is the one who tells everything.

“What is Turkey’s policy in recent period? Turkey has decided to create problems everywhere trying to force that it is the greatest regional power. Syria, Libya, Cyprus, issues of the Eastern Mediterranean with Greece. And now it is trying to push forward its policy in this region via Azerbaijan”, he said, adding that he is not so optimistic over the expected meeting of the Armenian and Azerbaijani foreign ministers in Geneva.

Gaspar Karapetian said during this period a very serious work has been done in the propaganda field, pushing forward the thesis according to which there is Turkey’s genocidal handwriting in the aggressive actions against Artsakh. He said both Armenia’s diplomacy and the Diaspora’s structures have worked actively.

“A great job has been done in the propaganda field. The Armenian national committees, Armenian structures operating abroad manage to raise the issue, bring the attention of the society, politicians to these processes. During the work with Europeans we explain them that jihadists have no borders. Wherever Turkey wants to create problems, it will send jihadists”, the EAFJD Chairman said.

As for the upcoming actions, he said it is necessary to work at all directions, having in focus the OSCE Minsk Group Co-Chairs. According to him, Russia can play a key role in stopping the hostilities against Artsakh. He says Russia needs to be more decisive, based on the allied relations with Armenia.

As for the possibility of the recognition of Artsakh’s independence at this stage, Gaspar Karapetian said at this moment it has no prospect in the EU member states, but added that creating a respective environment in this direction is very important and is being done actually.