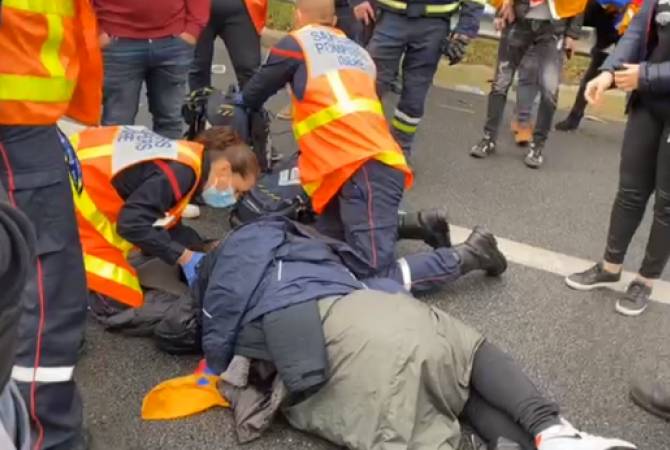 
YEREVAN, OCTOBER 28, ARMENPRESS. Armenians in France blocked the A7 highway leading to Valence demanding Paris to take action against the ongoing Turkish-Azeri attacks on Artsakh.

“We are losing our 18-20 year old children at the border,” said one of the demonstrators. “And we will do anything for our voices to be heard, we will even block airports if that’s what’s needed.”

The demonstrators were chanting “We will win”, “Aliyev dictator”, “Erdogan and Aliyev are terrorists,” “Recognition”.

During the demonstration three men armed with knives and hammers attacked the peaceful Armenian protest. One of the protesters lost consciousness after being hit in the head. A scuffle began between the demonstrators and the assailants, who are said to be Turkish nationals.

According to one of the demonstrators, the assailants were in a vehicle that was in the traffic jam before they attacked.

The demonstrators were forced to take self-defense actions. Police and first-responders arrived at the scene. The injured demonstrator is hospitalized. The assailants also required medical attention.