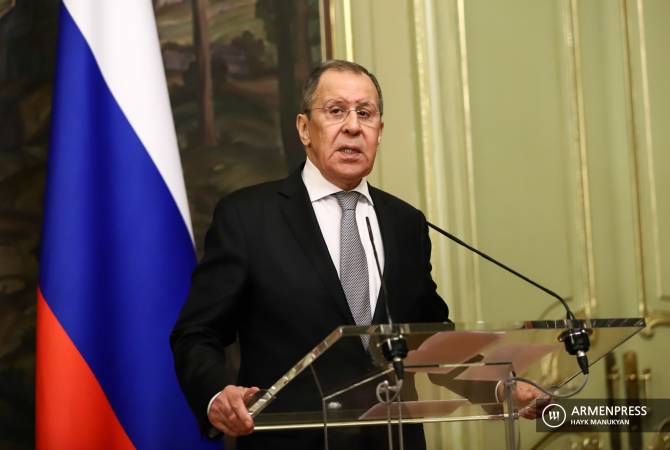 
YEREVAN, OCTOBER 12, ARMENPRESS. Russian Foreign Minister Sergey Lavrov commented on the statement of Azerbaijani President Ilham Aliyev according to which “Turkey must play a more active role in the Nagorno Karabakh conflict settlement process, both within the frames of the Minsk Group and other formats”.

During a press conference in Moscow, following the meeting with Armenian Foreign Minister Zohrab Mnatsakanyan, the Russian FM reminded that the three Co-Chair countries – Russia, US and France, have a mediation authority in the negotiations for settlement of the NK conflict. He also reminded that they have fixed the inalterability of the format of the negotiation process in one of the points of the trilateral statement made in Moscow.

“The statements of the recent days made from the world capitals highlight the commitment to the mandate of the three Co-Chairs”, he said.

The Russian FM added that the OSCE Minsk Group Co-Chairs are in Moscow and will meet with Armenian Foreign Minister Zohrab Mnatsakanyan, adding that last week they also had contacts with the Azerbaijani FM in Geneva.

“We reiterate the inalterability of the negotiation process, the negotiation format. We have reaffirmed the commitment to the further efforts aimed at achieving a political settlement through the trilateral joint statement, based on the principles which have been developed by the participation of the Co-Chairs”, Lavrov said.

He stated that Ilham Aliyev has also welcomed the Moscow agreements.

Sergey Lavrov informed that he has also contacted Turkish foreign minister Mevlut Cavusoglu and told him that they are expecting support to their efforts. “We had one more phone talk on Sunday during which the support to the Moscow document has been confirmed”, he said.

Summing up his remarks, the Russian FM said the Moscow agreements should work in real life, over which they are working.