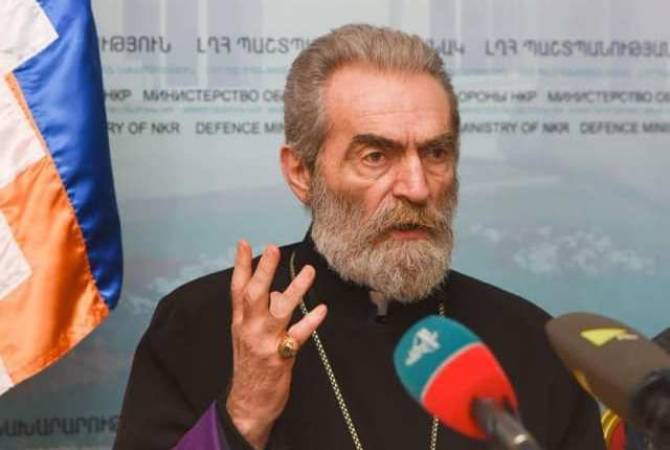 
STEPANAKERT, OCTOBER 9, ARMENPRESS. Archbishop Pargev Martirosyan, the Prelate of the Diocese of Artsakh of the Armenian Apostolic Church, says Artsakh will rebuild the Shushi Cathedral and all other settlements hit by the Azerbaijani forces like in the early 90s.

“Yesterday, by bombarding the Ghazanchetsots Cathedral, they deliberately tried to insult the symbol of our cross and force us into despair. This is the signature of international terror and barbarism, we understand this very well. We will rebuild both Stepanakert, and Shushi, and all other settlements and all infrastructures. We will rebuild through pan-national efforts, we, both our nation and our fatherland, will rise like phoenix ,” the Archbishop said.

“It’s us, our God and our army. Our 18-20 year old boys are true heroes, one can admire them, I thank their parents for bringing up such strong men for their country. They stand tall like mountains under daily artillery fire. Our forces are unequal, but we are fiercely withstanding, and our work is righteous and just,” he said.

The iconic Holy Savior Cathedral, also known as Ghazanchetsots, the symbol of the city of Shushi in Artsakh, the seat of the Diocese of Artsakh of the Armenian Apostolic Church, came under two separate missile attacks on October 8.

Three journalists were injured in the attack.