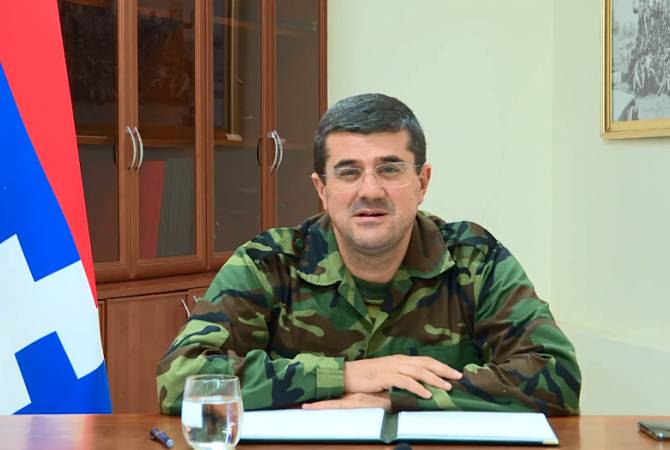 
YEREVAN, OCTOBER 4, ARMENPRESS. Azerbaijan is bombing various settlements of Artsakh, including the capital Stepanakert with Smerch, Polonez multiple rocket launchers, various missile systems for several days. UAVs continue circulating in the air of Stepanakert, President of Artsakh Arayik Harutyunyan said live on Facebook, adding that in response to this, the respective units of the Artsakh armed forces fired a rocket salvo for the first time by his order.

“I stated it in time, warned in time. I regret that we hit the permanent military deployment places of our historic city of Gandzak, Ganja, because they forced us to that”, the President of Artsakh said.

He informed that he has ordered to stop the firing in the direction of military facilities of cities for some time.

“Keep civilians away. You have started this war, you have violated the rules of humanism by targeting the civilian population. You have time to think. We will continue to the end, up to the last soldier is ready to die”, he said.

Azerbaijan continues targeting the civilian settlements of Artsakh, including the capital Stepanakert, with prohibited weapons. The Defense Army of Artsakh delivered powerful strikes at crucial military facilities deployed deep behind the Azerbaijani lines.