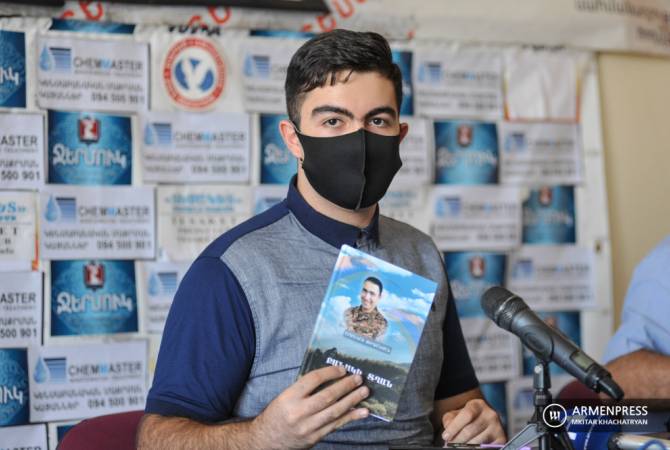 
YEREVAN, SEPTEMBER 8, ARMENPRESS. Artsakhi writer Vova Arzumanyan presented on September 8 The Army’s Son, a book dedicated to the memory of Captain Armenak Urfanyan, the 26-year-old Artsakh serviceman who was killed in action during fierce battles in 2016 when Azerbaijani military launched an offensive in what became known as the April Four Day War.

Speaking about the title of the book, Vova Arzumanyan – who is the Editor-in-Chief of the Artsakh-based Vardanank newspaper – said that the phrase is connected with what Urfanyan had once told his mother.

“Mom, I’m no longer your son, I am the army’s son,” Urfanyan told his mother once.

The book includes memoirs of Urfanyan’s mother, interviews with co-servicemen, as well as poems by Arzumanyan himself dedicated to the captain and the other heroes of the war.

Overnight April 1-2, Captain Urfanyan and his troops came under enemy fire in a heavily outnumbered ambush from Azerbaijan. During the fierce battle, the captain destroyed multiple attacking enemy fighters and one engineering-reconaissance armored vehicle. He was killed in action from tank fire.

He was awarded the posthumous Medal for Combat Service of Artsakh and the 1st Class Combat Cross Medal of Armenia.

In August 2020, President of Artsakh Arayik Harutyunyan awarded the posthumous Hero of Artsakh title to Urfanyan.