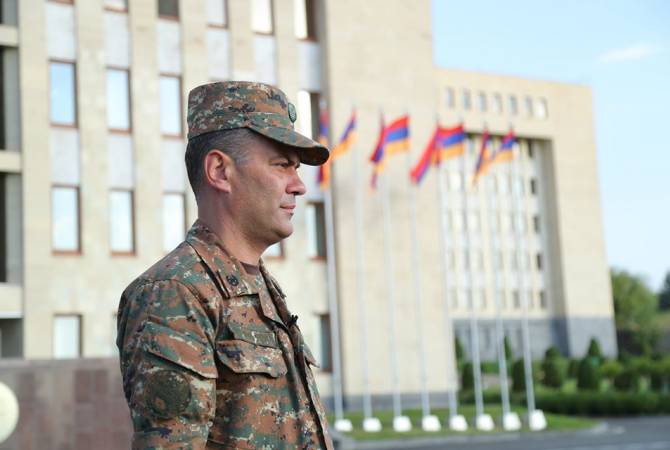 
YEREVAN, AUGUST 21, ARMENPRESS. Armenian Army captain Ruben Sanamyan displayed exclusive bravery, selflessness and courage in defending the country and ensuring its security, the Ministry of Defense said in a description of the heroism of the 44 year old officer who has become the latest recipient of the National Hero of Armenia title, the highest title in the country, for actions above and beyond the call of duty.

Only 18 people received the title in history.

“As an officer and commander, Captain R. Sanamyan displayed exclusive courage, selflessness and bravery in defending the fatherland and ensuring its safety. Captain Sanamyan skillfully commanded the personnel of a special reconnaissance team – encouraging the servicemen through his personal example, giving individual objectives, organizing the neutralization of multiple enemy attacks at the ANVAKH outpost by inflicting significant losses to the adversary manpower, arsenal and military equipment,” Stepanyan said in a statement.

Together with his team, Captain Sanamyan risked his life and carried out difficult and dangerous engineering works at the outpost’s surroundings, gathered valuable intelligence documents, weapons, ammunition and a number of other technical means and information through reconnaissance.

“As a commander, Captain Sanamyan accurately analyzed the adversary’s actions, assessed the situation, predetermined potential developments and through joint actions together with the outpost personnel kept the Anvakh outpost inviolable,” Stepanyan said.