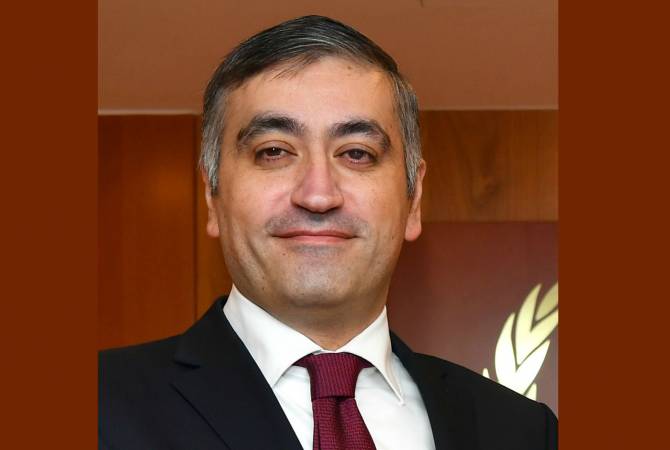 
YEREVAN, JULY 31, ARMENPRESS. At the initiative of the Armenian delegation the issue headlined ''Turkey's aggressive policy and bellicose behavior as a destabilizing factor in South Caucasus'' was included in the agenda of the OSCE Permanent Council's session on July 30.

As ARMENPRESS was informed from the press service of the MFA Armenia, Armenia's Permanent Representative, Ambassador Armen Papikyan informed the OSCE member states about the cases of ceasefire violation by Azerbaijan in the recent days, as a result of which an Armenian soldier was killed by sniper shoot, another was injured.

The Ambassador also informed about Azerbaijani announcements over the Azerbaijan-Turkey joint military exercises, emphasizing that all those acts were carried out a few days after the announcements of the OSCE Minsk Group Co-chairs, where the Co-chairs had emphasized the necessity to strongly preserve the ceasefire regime and urged to refrain from any provocative measure. Therefore, the Armenian side assesses the joint military exercises as joint provocation aimed at further escalation of the regional situation. Ambassador Papikyan emphasized that Azerbaijan bears the entire responsibility for the destabilization.

Referring to the role of Turkey, the Ambassador noted that without the unconditional support of Turkey Azerbaijan will be unable to keep the situation destabilized for a long-term period. Based on this, Armenia draws the attention of the OSCE member states on Turkey's aggressive policy and bellicose behavior against Armenia and the South Caucasus in general.

Afterwards, Ambassador Papikyan presented the announcements of Turkish president, foreign and defense ministers, which were drastically different from the announcements of other members of the international community. The Permanent Representative of Armenia to the OSCE Permanent Council added that Turkey has territorial aspirations in South Caucasus, which the Turkish leadership tries to justify as a ''historical mission''. Such approaches remind Armenia and the Armenian people about the Armenian Genocide and rise concerns among the public and authorities.

Ambassador Papikyan also referred to Turkey's behavior in relation to Nagorno Karabakh conflict settlement. He particularly mentioned that Turkey, being an OSCE Minsk Group member, has always had unconstructive policy. Turkey's overt support to Azerbaijan's maximalist approaches over Nagorno Karabakh conflict settlement harm the peace process and show that Turkey cannot be involved in any process dealing with the settlement of the conflict.