Erdoğan trying to intimidate Committees of Defense of Armenian Cause 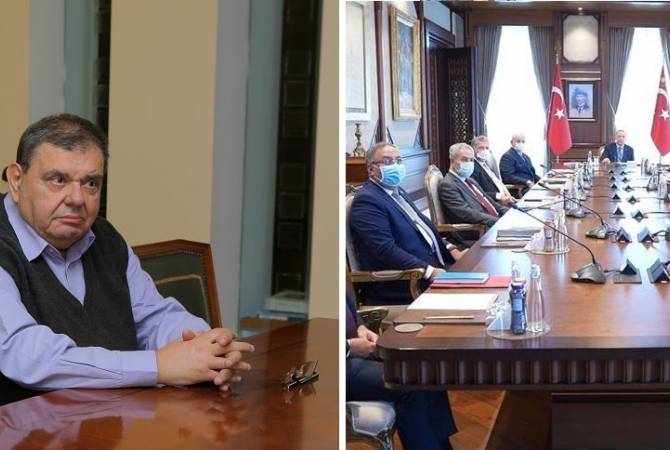 
YEREVAN, JUNE 18, ARMENPRESS. The Turkish President Recep Tayyip Erdoğan chaired a five-hour high-level meeting with his advisory board to discuss how to organize a crackdown on the civil activism that advocates for the recognition of the Armenian Genocide. First and foremost, Erdoğan aims at targeting and intimidating the Committees of the Defense of the Armenian Cause (ANCs) across the globe that have been effectively advocating for the recognition of the Armenian Genocide for decades, using the instruments of civic activism, ARMENPRESS was informed from the press service of the European Armenian Federation for Justice and Democracy (EAFJD).

The European Armenian Federation for Justice and Democracy (EAFJD) addressed a statement to the European institutions, including the European Parliament, the Council of the European Union, the European Commission and the  Council of Europe, urging them to undertake concrete steps in order to stop the dangerous xenophobic policy of the Turkish authorities, directed against the activists of the Armenian cause.

“This meeting is in fact the logical continuation of Erdogan’s statement in May this year  where  he threatened to fight against the “Armenian lobby” which certainly includes in particular the committees of the Defense of the Armenian Cause worldwide (ANCs). It comes to prove once again that unfortunately the denial of the Armenian Genocide and the incitement of hatred against Armenians are a state policy in Turkey,” said the EAFJD President Kaspar Karampetian.

Karampetian further elaborated: “Now Erdogan’s government officially and openly decided to carry out a state policy of intimidation against those who advocate for the recognition of the Armenian Genocide worldwide. The Turkish authorities should know by now that intimidation against the activists of the Armenian Cause has never worked in the past, neither will it work in the future. This only gives a strong impetus to be even more active and continue joining our efforts in our pursuit of justice. This meeting however shows the true colours of Erdogan’s government once again and how far it can go to. The recognition, condemnation of the Armenian Genocide as well as reparations are a matter of global justice. Turkey has no chance but come to terms with its past – something that has been demanded by the parliaments of dozens of countries worldwide as well as by the European Parliament.”