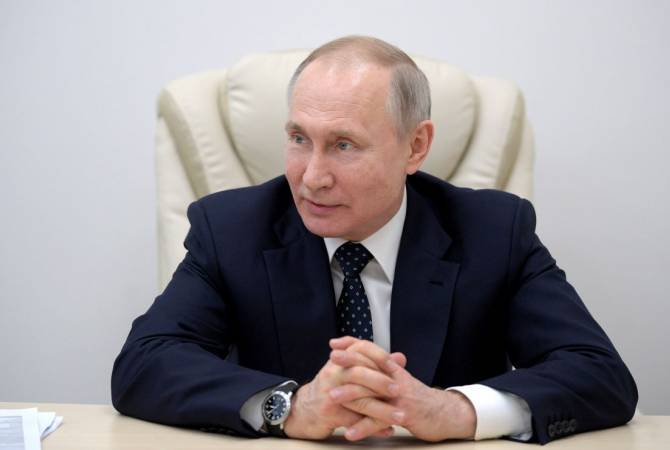 
YEREVAN, MAY 8, ARMENPRESS. Russian President Vladimir Putin has extended congratulations on the occasion of the 75th anniversary of victory in the Second World War to leaders and nations that formerly made up the Soviet Union, TASS reports citing the Kremlin press service.

“Vladimir Putin sent congratulatory messages to the leaders and citizens of Armenia, Belarus, Kazakhstan, Kyrgyzstan, Azerbaijan, Moldova, Tajikistan, Turkmenistan, Uzbekistan, Abkhazia, South Ossetia as well as the peoples of Georgia and Ukraine, on the 75th anniversary of Victory in the Great Patriotic War”, the press service noted.

The Russian leader emphasized that these countries treasure the memory of heroes whose bravery on the frontlines and selfless labor in the rear contributed to the defeat of Nazism, which became our shared heritage. "It is the sacred duty of today’s generations to preserve forever the memory of those who defended the freedom of their native land at the cost of innumerable sacrifices and hardships, and to surround our dear veterans with care and attention," noted Putin.

The president also urged "resolute opposition to any attempts to rewrite the results of the Great Patriotic War, to whitewash or consign to oblivion the inhuman crimes committed by the Nazis and their accomplices."

He expressed confidence that "the shared memory of the heroic deeds of our fathers and grandfathers would have a constructive impact on bilateral cooperation in a variety of areas and on partnering to confront modern threats and challenges like the coronavirus pandemic."

11:29, 05.19.2022
3068 views U.S. recognizes role of population of Nagorno-Karabakh in deciding its future–Ambassador Tracy’s interview to ARMENPRESS