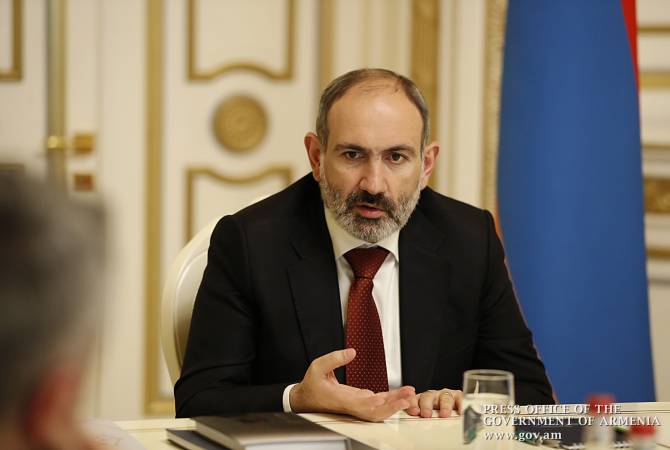 
YEREVAN, FEBRUARY 26, ARMENPRESS. In May 2018 Armenia announced an unstoppable flight against corruption which was approved not only by the Armenian society, but also by the international public, Prime Minister Nikol Pashinyan said at a consultation convened today in the government.

“However, in this period I have stated for several occasions that despite the volumes of anti-corruption fight are unprecedented, I am not satisfied with the results yet. And I am confident that the public as well is not satisfied with its results. Moreover, I want to note that in this case I not only mean the verdicts on corruption cases, but also the return of money stolen from the state and the people to Armenia’s state treasury. But let me also explain in this respect the unprecedented volume of this fight. The statistics released by the Special Investigative Service is worth looking. According to it, in 2019 the money restored by the criminal cases comprised 4 billion 331 million drams which is seven times more from the whole money restored by the criminal cases during the entire previous activities of the Special Investigative Service”, Pashinyan said, adding that the same situation is in other law enforcement bodies.

The PM informed that the money restored by the National Security Service in 2019 has increased by 1371% compared to 2017, the money restored by the Investigative Committee increased by 462%, that by the Police – by 10767%. “This statistics and percentage growth, of course, is impressing, if not to say, sensational. But when we turn these percentages into absolute numbers, we should record that after the 2018 Revolution we have restored 150 million USD in damages by the corruption cases with the most optimistic calculations. Here we have a problem of statistical calculations and have to rely on approximate numbers. But, in any case, let’s look at these 150 million USD as a base for calculation. If we remove the money restored by the State Revenue Committee, this figure will be partially cut”, he added.

The PM asked that when we rely only on the statistics of restorations by the SIS, Investigative Committee, NSS and the Police, whether they can state that the 70-80 million restorations in the one and a half year proportionally reflect the damage Armenia faced in the past 30 years due to corruption crimes. “My answer is definitely no, once again no”, he said, adding that the slow operation of the law enforcement system allows some corrupted officials to escape from Armenia, for the others it opens a window to hide the proofs.

Pashinyan said it’s the high time to deeply analyze and assess the results achieved in the past 1.5 year in the fight against corruption, as well as those relating to the restoration of damages caused to the state. He added that Armenia has suffered billions of dollars in damages as a result of corruption activities of high-ranking officials, and he as the leader of Armenia received a mandate from the people for the promises to bring back these billions.

The PM expressed hope that they will be able to find concrete answers and also presented one more important clarification. He stated that all these cannot and should not be interpreted as a negative statement against legal entrepreneurial activity in Armenia. “The business, the economy activity in Armenia should be fully protected from any illegal interference. We only put one task before the legal business – pay the legal taxes. After this point our statement to the entrepreneurs remains the same – get richer and enrich. And we will create all the necessary conditions for that”, the PM concluded.