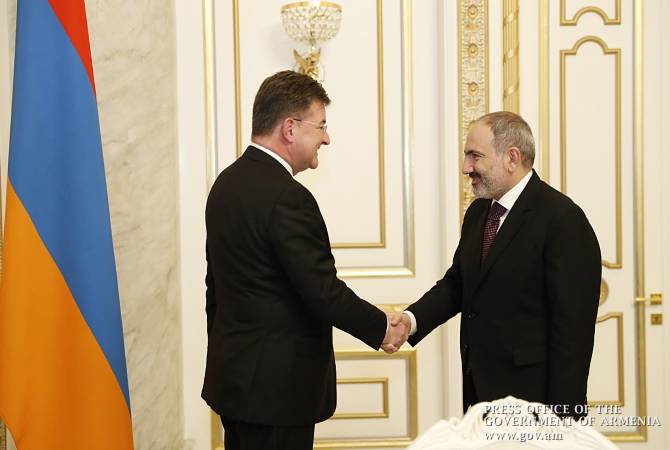 As ARMENPRESS was informed from the Office of the Prime Minister of Armenia, welcoming Miroslav Lajčák’s visit to Armenia, PM Pashinyan highlighted the opening of an embassy in Yerevan on February 24, which will give new impetus to bilateral relations. Nikol Pashinyan noted that Armenia is interested in the development of cooperation with Slovakia in both bilateral format and in the sidelines of the European Union. According to the PM, the EU is Armenia’s main partner in the sphere of democratic reforms and Armenia highlights the assistance of both EU structures and EU member states to theat process. The PM thanked Slovakia for its balanced position on Nagorno Karabakh conflict settlement process.

Miroslav Lajčák noted that Armenia is an important partner for Slovakia, and the opening of an embassy in Armenia creates new opportunities for the activation of bilateral relations. The Foreign Minister of Slovakia saluted Armenia’s ambitious democratic reform agenda, noting that Slovakia is ready to share its experience in reform implementation. He noted that Slovakia, as an EU member state, is ready to support Armenia in the implementation of the Comprehensive and Enhanced Partnership Agreement between Armenia and the EU, as well as in the visa liberalization process.

Referring to Nagorno Karabakh conflict, Miroslav Lajčák emphasized that his country fully supports the peace process under the mediation of the OSCE Minsk Group Co-chairs.