Partnership between Armenia, Artsakh is key security component of our people – Pashinyan 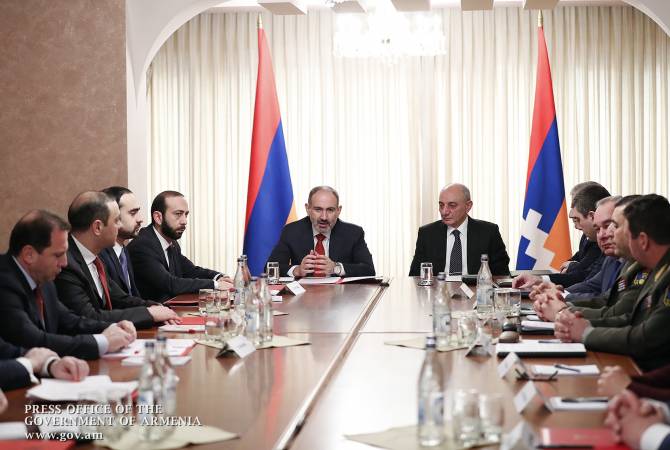 
YEREVAN, FEBRUARY 22, ARMENPRESS. The joint session of the Security Councils of Armenia and Artsakh took place in Stepanakert chaired by Prime Minister of Armenia Nikol Pashinyan and President of Artsakh Bako Sahakyan.

As ARMENPRESS was informed from the Office of the Prime Minister of Armenia, the heads of the two Armenian republics delivered speeches.

PM Pashinyan noted in his speech that this is the 3rd joint session of the Security Councils. “It is an absolute necessity that the authorities of Armenia and Artsakh walk together and the partnership between Armenia and Artsakh is the key component of the security of our country, motherland and people”, Pashinyan said, adding with satisfaction that the authorities of Armenia and Artsakh have similar views on Nagorno Karabakh conflict settlement. For Pashinyan one of the shared positions of the two Armenian republics is that it’s impossible to solve NK issue without Artsakh’s participation in the negotiations.

“Of course, one of the most important areas of cooperation between Artsakh and Armenia is security, because Artsakh and Armenia are one and the same security zone and here the goals of Armenia and Artsakh can in no way be distinct. In this context, we attach great importance to the combat readiness of the Armed Forces of the Republic of Armenia and the Republic of Artsakh, as well as to the moral and psychological situation in the Armed Forces”, Pashinyan said, adding that in 2019 the Government of Armenia allocated huge resources for making significant changes in army, including acquisition of new weapons.
“And our expectation is that discipline, moral and psychological situation and inter-personal relations should be brought to a totally new level and I think that issue is really solvable”, he said.

Highlighting the role of army as the key security guarantee for Armenia and Artsakh, PM Pashinyan noted that democracy is also an important security guarantee. “We know that soon national elections will take place in Artsakh and I think that the elections during the entire existence of Artsakh have shown the drastic differences between the Republic of Artsakh and the Republic of Azerbaijan in terms of democracy, which is one of the reasons why Artsakh and Azerbaijan can never form a joint political structure”, PM Pashinyan said, expressing confidence that the upcoming presidential and parliamentary elections of Artsakh will once again demonstrate Artsakh’s democratic nature.

PM Pashinyan highlighted economies of Armenia and Artsakh as another key security component, since it’s the economy that has to provide the armed forces with necessary accommodations.

“Meanwhile, we have to record that the security environment in our region unfortunately becomes more fragile and here we see more escalations than solutions and we will discuss this issue during the joint session of the Security Councils”, PM Pashinyan said, emphasizing that Armenia and Artsakh have a joint responsibility to ensure the security of not only of Armenia and Artsakh, but also should have their voice in the preservation of regional and international security.