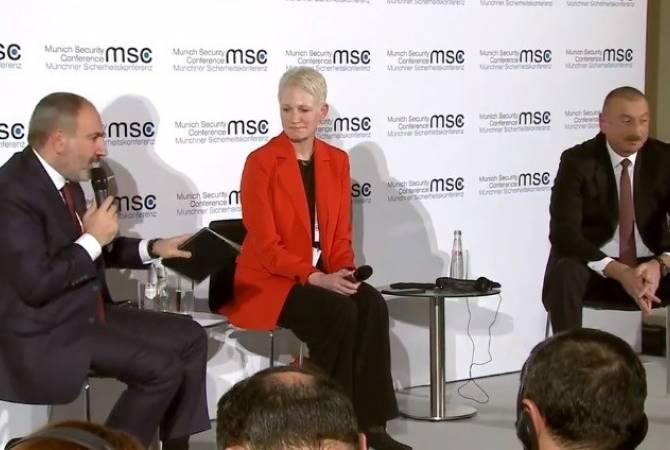 
MUNICH, FEBRUARY 15, ARMENPRESS. Armenian Prime Minister Nikol Pashinyan proposes the idea of micro-revolutions in the negotiation process for solving the Nagorno Karabakh conflict. He has already proposed three micro-revolutions at different times, but received no response from the Azerbaijani President.

He said the next revolution is that during one of his recent press conferences he called on the Armenian and Azerbaijani users of social media not to use social networks for insulting or threatening one another. “I called on to use the social media, the new technologies to try to understand each other better. This is an approach as well. And I tried to address directly the people of Azerbaijan, and I would not oppose if President Aliyev talks to the Armenian people”, the Armenian PM said, but added that there is a very strange fact because Aliyev refuses to talk to the representatives of Nagorno Karabakh. “How it’s possible to solve this conflict without talking to the representatives of Nagorno Karabakh?”, the PM asked. He stated that Nagorno Karabakh has been recognized as party to the conflict and party of negotiation by the OSCE and this happened twice, on March 24, 1992 and in 1194 during the OSCE summit in Budapest.

Pashinyan said the Armenian side is devoted to the negotiation process, the peace process. “And I think that the negotiation should take place within the OSCE Minsk Group Co-Chairmanship format. And we are working quite intensively and are ready to put real efforts, to make real difference to reach the solution of the conflict”, he said.