Meeting of Armenian PM and Bundestag President kicks off in Berlin 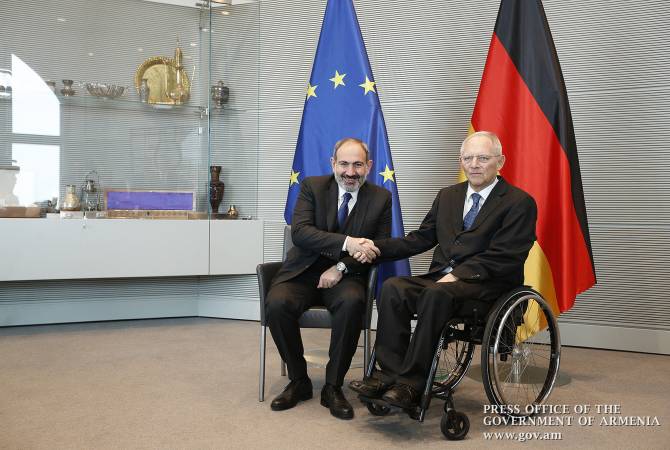 
BERLIN, FEBRUARY 13, ARMENPRESS. The meeting of Armenian Prime Minister Nikol Pashinyan with President of the German Bundestag Wolfgang Schäuble kicked off in Berlin on February 13, Armenpress correspondent reports from Berlin.

The Armenian PM arrived in Germany on a working visit.

From the Armenian side the meeting was attended by Foreign Minister Zohrab Mnatsakanyan, Ambassador of Armenia to Germany Ashot Smbatyan, Minister of Economy Tigran Khachatryan, the ruling My Step faction MP, chair of the parliamentary standing committee on foreign affairs Ruben Rubinyan and assistant to the PM Hrachya Tashchyan.

From the German side the meeting was attended by head of the Division of Interparliamentary Organizations at the Bundestag Saskia Leuenberger, press officer Sven Göran Mey and others.

On February 13 the Armenian PM is scheduled to meet with German Chancellor Angela Merkel.