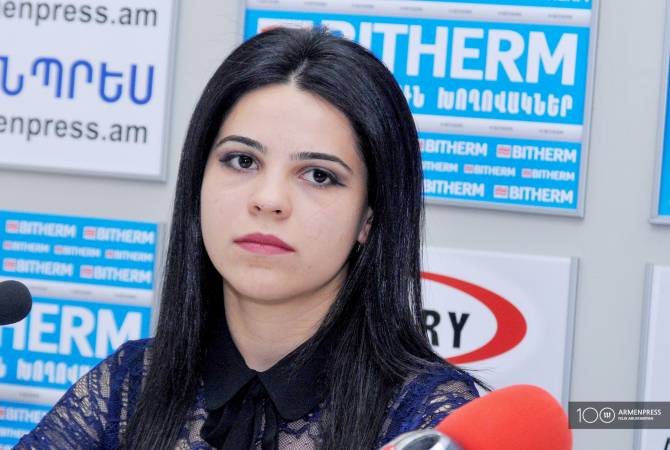 
YEREVAN, FEBRUARY 4, ARMENPRESS. Member of Parliament of Armenia Tatev Hayrapetyan, who is also a member of the Armenian delegation to the Parliamentary Assembly of Council of Europe (PACE), considers PACE winter session successful for Armenia. This session was the last one for the current delegation of Azerbaijan at PACE.

Tatev Hayrapetyan gave an interview to ARMENPRESS, summing up the results of the session and introducing what changes she is expecting from the upcoming members of the Azerbaijani delegation.

-The Armenian delegation recorded some success at the PACE winter session: Vladimir Vardanyan was elected chairman of PACE Sub-Committee of Human Rights, Edmon Marukyan was elected first deputy chair of the Committee on Legal Affairs and Human Rights, Sos Avetisyan – vice-chair of Sub-Committee on Media and Information Society, Hovhannes Igityan – vice-chair of ALDE faction. What will this give to Armenia, and what is the reason of electing so many Armenian parliamentarians to these key positions?

-I think this was a result of the major active works done by our delegation. This gives new opportunities for deepening our ties to use it for the benefit of Armenia. I think this also raises visibility and gives an additional opportunity to us to demonstrate ourselves.

-Can this be linked with Armenia’s recent Velvet Revolution?

-Of course, the attitude towards Armenia has changed, and this is a fact. Recording and welcoming Armenia’s democratic processes is also a fact. This is also linked with the fact that now our parliamentarians are also part of a pan-European agenda in addition to being engaged in the Armenian-Azerbaijani debates, and this is a very important recording for the future success. In the past PACE has been viewed exclusively as a platform for the Armenian-Azerbaijani “clashes”, but now, in addition to responding to the Azerbaijani delegation members, we also push forward topics in accordance with the pan-European agenda and establish our relations and ties also in this context which is again useful and contributes to strengthening our positions.

-During the PACE winter session the resolutions “Threats to media freedom and journalists’ security in Europe” and “Reported cases of political prisoners in Azerbaijan” were adopted which angered official Baku. What will these two resolutions give us?

-We should record that the PACE resolutions have exclusively a consulting nature, but they can be considered as key recordings connected with that particular country. Remember the previous caviar diplomacy and the provisions put by Azerbaijan, and the current situation Azerbaijan is in. Moreover, if in the past even comparisons were made with Armenia, now these are just ruled out, Armenia is absolutely in another camp and is not viewed as equal with Azerbaijan. This further angers Azerbaijan because such kind of reports record the real situation of human rights, political prisoners and other issues existing in Azerbaijan. Even the author of the report on topic of political prisoners stated that the presence of such a country in the Council of Europe is problematic and they should take action to solve these issues.

-Snap parliamentary elections will be held in Azerbaijani in February. It’s expected the Azerbaijani delegation’s composition at PACE will change. What are your expectations from this new staff? What staff do you expect?

-The faces, but not the policy and approaches, will change, because in reality, any change in that corrupt, authoritarian country is very formal and cannot give any hope. There will be young people, I don’t know to what extent its staff at PACE will change. I think changes will take place, but they are only changes in faces, not in the policy or values.

-Are you expecting any change in their approaches on thinking and various issues?

-I am not expecting such a change. Moreover, maybe in the beginning they [the Azerbaijani delegation at PACE] will try to be tougher as they have something to show to their public.

-How do you assess the PACE winter session for Armenia in terms of parliamentary diplomacy?

-Quite successful. I am very happy to record that our 1-year activity brought such good and positive results, but the new achievements are ahead.