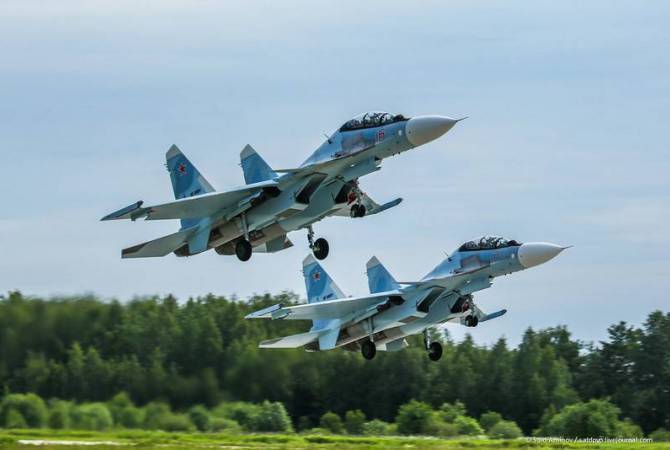 
YEREVAN, DECEMBER 27, ARMENPRESS. The SU-30SM fighter jets have been supplied to the Armenian military.

The pilots performed maneuvers and showcased the capabilities of the jets before landing.

The exact number of the supplied planes is unclear at the moment. Previously it was announced that Armenia will acquire 12 jets.

The Prime Minister then stepped into the cockpit of one of the jets and was briefed by a military official about the SU-30SM’s capabilities.

The Sukhoi Su-30 is a Russian-made twin-engine, two-seat supermaneuverable fighter aircraft.  It is a multirole fighter for all-weather, air-to-air and air-to-surface deep interdiction missions.

The Su-30SM (SM for Serial, Modernized) is considered a 4+ generation fighter jet. The aircraft has been upgraded for radar, radio communications systems, friend-or-foe identification system, ejection seats, weapons, and other aircraft systems.

It has frontal horizontal fins and steerable thrusters for supermaneuverability.

The aircraft can be used to gain air supremacy same as for targeting adversary on the ground using wide range of weapons including air-to-air, air-to-surface and guided and unguided bombs with total weapons weight up to 8000 kg.