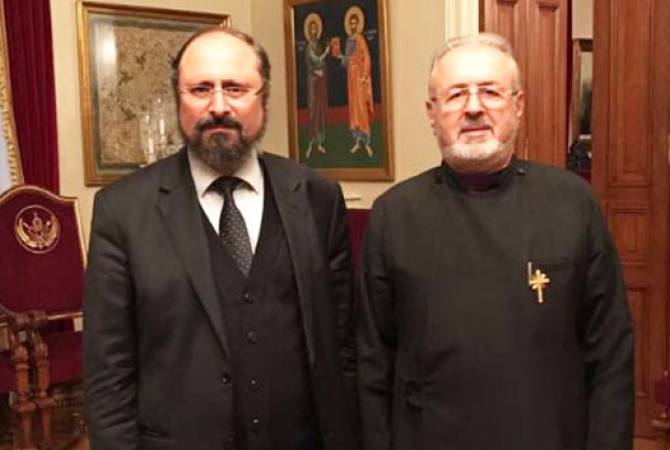 
YEREVAN, DECEMBER 11, ARMENPRESS. Amid the ongoing, highly anticipated election of a new Armenian Patriarch of Constantinople, one of the two candidates already congratulated the other in light of indications of the latter’s potential victory.

Former general vicar Archbishop Aram Ateshian (pictured right), who is Bishop Sahak Mashalian’s only opponent in the election, issued a statement on Wednesday amid the ongoing election, congratulating Mashalian in his victory after the latter garnered greater support in the first round.

If Mashalian is elected patriarch and chooses to retain his name he will be proclaimed Patriarch Sahak II. (In 1707, the Patriarch was Sahak I).

The 85th patriarch is being elected by special delegates composed of representatives of both the clergy and secular circles, who in turn were elected by the patriarchate’s synod and the local Armenian community of Istanbul respectively.

According to earlier reports delegates endorsing Mashalian had received more votes, and the Bishop is  expected to win in the election, defeating his only opponent - Archbishop Aram Ateshian, the former general vicar of the patriarchate.

The position of the Patriarch was vacant after Mesrob II passed away in March, 2019. Mesrob Mutafyan was elected the 84th Armenian Patriarch of Constantinople on 14 October, 1998. In 2008, the patriarchate announced that Mesrob II was suffering from Alzheimer’s disease. He withdrew from all his duties and public life, but formally remained the Patriarch. Mesrob II was incapacitated and appeared in a comatose state, which led to the synod retiring him in an effort to hold new elections, something Turkish authorities were not in favor of.