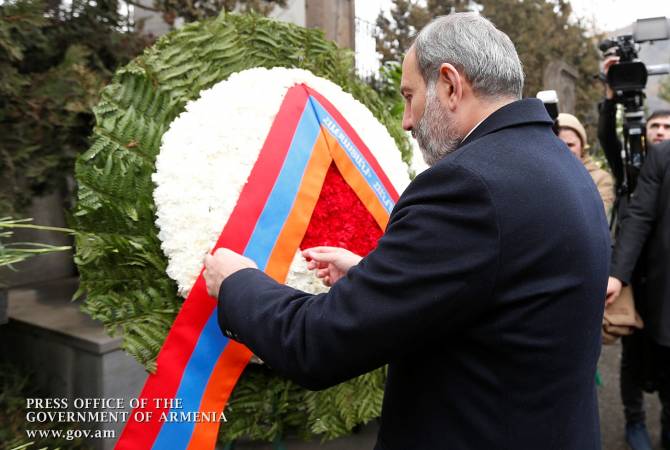 
YEREVAN, DECEMBER 7, ARMENPRESS. Prime Minister Nikol Pashinyan is visiting the province of Lori in Armenia on the occasion of the 31st anniversary of the 1988 devastating Spitak earthquake.

PM Pashinyan’s first stop in the province was the Shirakamut community, where he laid flowers at a memorial honoring the memory of the victims of the earthquake.

The PM was accompanied by Governor of Lori Andrey Ghukasyan, Minister of Territorial Administration and Infrastructures Suren Papikyan, Urban Development Committee head Vahagn Vermishyan and others.

Pashinyan then headed to the local town hall to meet the residents of the community and was briefed on the issues in the town. In his speech to the residents, the Prime Minister attached importance to the implementation of subvention programs.

“We must launch subvention programs where both the government, the resident and the town hall are participating. This is an important format of cooperation,” PM Nikol Pashinyan said.

Pashinyan said supervision must be heightened in order for public funds to be spent efficiently.

The residents raised the housing issues of the earthquake victims. Pashinyan said the active governmental support program is expiring next year, but the government is making new studies to understand how many families haven’t yet received compensation. “The completion of the active state program doesn’t anyhow mean that the topic is closed, we will address it again,” Pashinyan said.