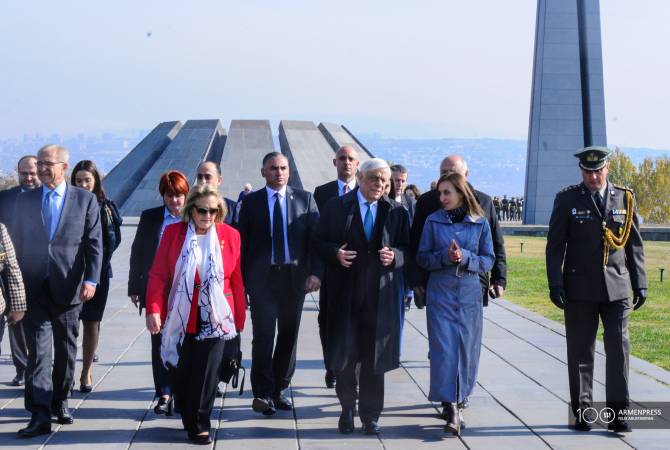 
YEREVAN, NOVEMBER 5, ARMENPRESS. President of Greece Prokopis Pavlopoulos and First Lady Vlassia Pavlopoulou-Peltsemi visited the Tsitsernakaberd Memorial in Yerevan on November 5 to pay homage to the victims of the Armenian Genocide. President Pavlopoulos also toured the Museum-Institute and signed the guestbook.

“The memory of the Armenian Genocide must be preserved, if genocides were to be forgotten these crimes would happen again. This is a message from Yerevan to everyone. We see that such events are repeating in the world, and there are persons who are the enemy to man and civilization. We have survived the same horror as Armenians have. I am very grateful to the President and Government of the Republic of Armenia for hosting us because the Armenian-Greek relations have long years of history and we must preserve this common memory,” the Greek president told reporters.

He then planted a symbolic spruce in the tree lane of the memorial.