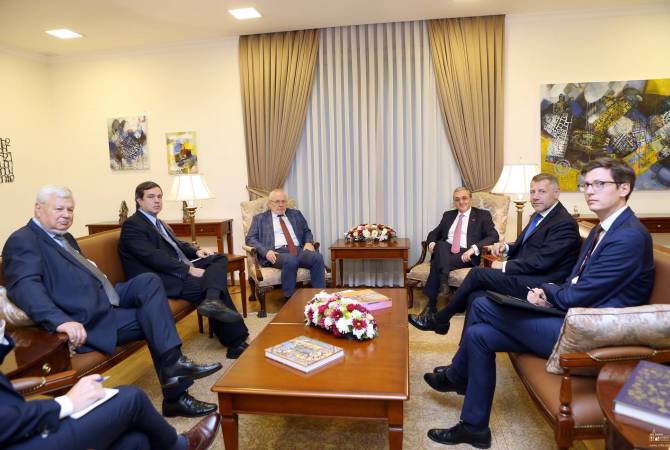 
YEREVAN, OCTOBER 15, ARMENPRESS. Foreign Minister of Armenia Zohrab Mnatsakanyan on October 14 received the Co-Chairs of the OSCE Minsk Group - Igor Popov of the Russian Federation, Stéphane Visconti of France and Andrew Schofer of the United States of America, as well as the Personal Representative of the OSCE Chairperson-in-Office Andrzej Kasprzyk, the MFA told Armenpress.

During the meeting the officials touched upon the discussions held between the Armenian and Azerbaijani FMs in New York this year in September and the developments following that meeting. They attached importance to the formation of a favorable environment for peace and in this context the reduction of tension in the border.

The Armenian FM and the OSCE Minsk Group Co-Chairs continued discussing the positions of the parties in the peaceful settlement process of the Nagorno Karabakh conflict, and in this context the FM highlighted the necessity of ensuring the proportionality of the commitments in the peace process.

The meeting participants also exchanged views on the future actions to be taken within the co-chairmanship format.

On the sidelines of their regional visit the OSCE Minsk Group Co-Chairs will also meet with the authorities of Artsakh and Azerbaijan.