PM Pashinyan meets with representatives of prestigious IT companies 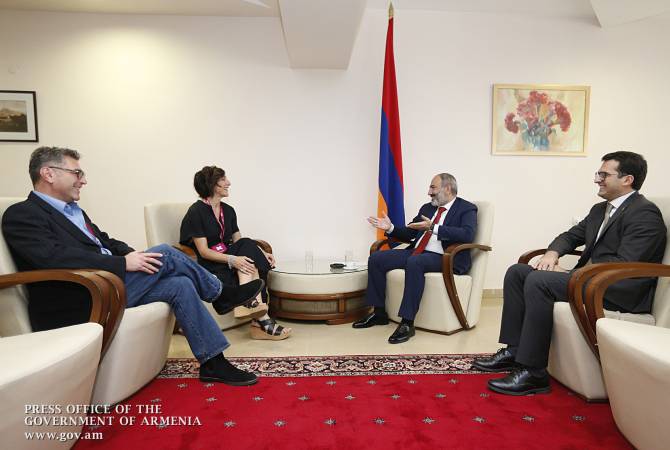 As ARMENPRESS was informed from the Office of the Prime Minister, following the opening ceremony the PM met with the heads of a number of leading IT companies participating in WCIT 2019. The 1st meeting of the PM was with Co-Founder of Infosys Corporation, well-known Indian businessman Narayana Murthy.  Infosys is engaged in digital services and consulting.

PM Pashinyan welcomed Narayana Murthy in Armenia and highlighted the participation of the head of such a prestigious IT company in the 23rd World Congress of on Information Technology in Yerevan, which is a good opportunity for the sides to discuss cooperation opportunities.

The PM talked about the importance if IT development in Armenia, noting that the Government of Armenia has declared the sphere as an economic priority and carries out a consistent policy aimed at making Armenia a technological country, particularly in the direction of developing educational infrastructures and creating relevant atmosphere for talented people. “We consider education one of the key components for developing our country and at the moment we move forward in the path of implementing reforms in the sphere of education. Our IT sector records stable development with 20-25% annual growth. We have also set broad tax privileges for start-ups”, Nikol Pashinyan said.

PM Pashinyan welcomed the participation of the delegation of Mubadala in such an important event, which is a good opportunity for discussing partnership prospects. Nikol Pashinyan talked about the political changes in Armenia, noting that’s serious steps have been taken to eliminate systemic corruption, which is very important for making the investment atmosphere attractive. “Our strategy is developing the technological sphere in Armenia, where there is huge potential. The IT sector dynamically develops in our country. We have established a Ministry of High-Tech Industry and we are interested in the possible cooperation with your company”, PM Pashinyan said.

Homaid Abdullah Al Shimmari congratulated PM Pashinytan for organizing the 23rd World Congress on Information Technology at a high level and thanked for the invitation to participate in the congress. He presented the activities of the company, noting that Mubadala Investment Company makes sustainable and profitable investments in over 50 countries, aiming to contribute to the development of integrated and diversified international economy.  “We have good impressions from the technological sphere of Armenia and we are interested in cooperation, particularly in the establishment of venture funds’’, the representative of the Mubadala company said.

The interlocutors exchanged onions on the opportunities of cooperation in IT sector.

Welcoming Katherine Sarafian’s participation in WCIT 2019, PM Pashinyannoted that this event of international importance is held in a very important period for Armenia, when following the fundamental political changes the country has entered into the phase of economic and technological changes. “Our goal is making the technological sphere a driving force for our economy and the cooperation with your company can be very useful for us. I think you will be able to find interesting platforms for launching technological activities in our country. We will be glad to see you in Armenia not only as a representative of Pixar Animation Studios, but also our compatriot whose achievements makes us proud”, Nikol Pashinyan said. He introduced the development dynamics of the IT sector in Armenia, the tax privileges for technological companies, noting that the Government continues that process.

Prime Minister of Armenia met with Rajiv Ramaswami , CEO of VWmare company in the sidelines of WCIT 2019. VWmare Company is engaged in compute, cloud, networking and security, and digital activities. The company opened an office in Yerevan in 2010.

“I am glad to welcome you in Armenia during this important event. I am very glad for having very reliable partners in the person of the Armenian office of VWmare and we are proud of our compatriots who have established such an effective cooperation between Armenia and your company. We expect future success of your company in our country. Our Government makes all efforts to progress the technological sphere in our country. One of the important steps is the decrease of income tax for IT companies, the legislative changes of which will enter into force from January 1, 2020”, Nikol Pashinyan said. The PM also referred to the dynamics of the development of the IT sector in Armenia, presented the indexes and the steps taken by the Government.

CEO of VWmare company Rajiv Ramaswami  noted that he is glad to visit Armenia and to participate in WCIT 2019. Referring to the activities of the Armenian office of the company, Rajiv Ramaswami  noted that back in 2010, when VWmare just started operating in Armenia, it had only 16 employees, but now this number has reached 200. According to him, this fact speaks about the huge technological potential of Armenia, existence of talented specialists and the dynamic development of this sphere. “We are very happy to invest in the sphere of human talents, which really exists in Armenia. I have only one request to you, add the number of the talents, invest in the sphere of technological education”, Ceo of VWmare said.

Nikol Pashinyan noted that the development of the sphere of education and the reforms in that sphere are among the priorities of the Armenian Government and at the moment Armenia is moving forward in the direction of establishing friendly educational conditions for talented people.

Following the meetings PM Pashinyan toured in the pavilions of WCIT 2019, got acquainted with the productions and services of the technological companies.