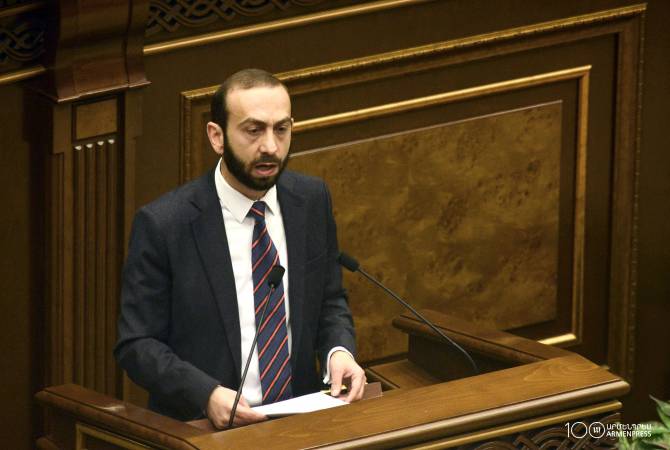 
YEREVAN, OCTOBER 3, ARMENPRESS. According to the President of the National Assembly of Armenia Ararat Mirzoyan, Hrayr Tovmasyan cannot occupy the post of the President of the Constitutional Court of Armenia, since he had and continues having political motivations, ARMENPRESS reports Mirzoyan talked about this during the discussion of the draft decision initiated by ''My step'' bloc, which is about applying to the Constitutional Court for suspending the powers of Hrayr Tovmasyan.

Ararat Mirzoyan noted that for years the state budget had been looted, and currently a number of criminal cases have been initiated, emphasizing that Hrayr Tovmasyan has been the supporter of that corrupt regime.

Ararat Mirzoyan said that from political or moral viewpoint it may be enough for banning Tovmasyan to be the President of the Constitutional Court, but the existing legal regulations do not allow that.

According to Mirzoyan, Hrayr Tovmasyan has had a political motivation, which was concealing the crimes of the former government.

''I insist that Hrayr Tovmasyan had and continues having political motivations, therefore he cannot occupy the post of the President of the Constitutional Court. He can be a politician, he can lead an opposition party that will severely criticize us. He can do anything allowed by the law. We live in a free country, but he cannot be the President of the Constitutional Court'', Ararat Mirzoyan said.