LA to be focus of enhancing cooperation with California, PM Nikol Pashinyan says at City Hall 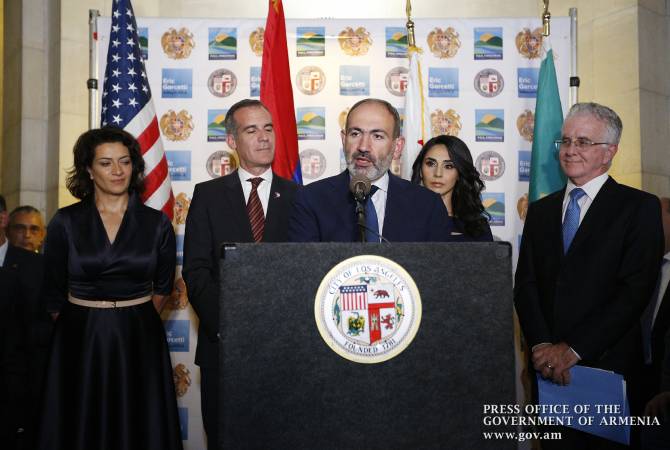 
YEREVAN, SEPTEMBER 23, ARMENPRESS. Prime Minister Nikol Pashinyan and his spouse Anna Hakobyan have participated at an official reception on behalf of Los Angeles Mayor Eric Garcetti at the LA City Hall during their working visit to the United States.

“I am very happy to be here today,” the Armenian PM said at the event.

“I would like to express my deep gratitude to Mayor of Los Angeles Eric Garcetti for organizing this beautiful event and giving us the occasion for our communication. Mr. Garcetti, we are highly appreciating your devotion and support to the Armenian community. I would also like to take this opportunity to express my deepest appreciation to City Councilmember Paul Krekorian, Supervisors Kathryn Barger and Hilda Solis for their valuable contribution in the organization of the public event.

I would like to thank California Governor Gavin Newsom, who couldn’t participate in this meeting and whom I will meet later in New York, for his dedication to advancing friendship and Armenia-California partnership. During that meeting a framework cooperation agreement will be signed between Armenia and California.

My sincere thanks to Lieutenant Governor of California Eleni Kounalakis for being here with us today.

Armenia is greatly appreciating its relations with the United States, the big State of California and the city of Los Angeles. This is one of the unique places on earth where we have a big centralization of Armenian intellectual, cultural, religious and financial potential. And this from many perspectives is giving birth to a powerful centrifuge force for 10 million Armenians of the Diaspora.

I am happy today when I see all traditional Armenian political parties and organizations present at this event. I am happy to see flourishing communities of all Christian denominations. I am happy to see cultural, educational, financial and attorney organizations. Los Angeles, with its Armenian churches, monuments, schools, cultural and sports centers is a wonderful example of fundamental integration of Armenians in American society.

This is a very firm foundation, a permanent basis in our relations with the United States, which is truly complementary and beneficial. Today, our strong ties continue getting stronger with cultural exchanges, joint entrepreneurial activities, which is steadily increasing the level of our mutual-trust, mutual support and mutual understanding.

Next year we will mark the 15th anniversary of the sister city agreement between Yerevan and Los Angeles, which will be marked with a number of initiatives which will contribute to cooperation between the two cities. We highly appreciate former mayor Antonia Antonio Villaraigosa and current mayor Eric Garcetti’s efforts in encouraging this cooperation and considering new opportunities for expanded partnership.

During this visit we will make one more step in the direction of making our friendship more practical and effective. Tomorrow we have a big California-Armenia business forum followed by a signing ceremony of two important agreements aimed at developing our commercial ties.

This is a good chance to express our gratitude to the authorities of the State of California and the City of Los Angeles for always displaying the cultural and traditional values of our country. This is a valuable contribution in promoting Armenia in this country and highlighting it on American tourism maps. All these festivals, film screenings, concerts and other events create signals between Armenia and California for more active exchanges and more intensive contacts between the people.

I would also like to reaffirm our gratitude to the authorities of the State of California and the City of Los Angeles for supporting the opening of an Armenian Genocide memorial in the very heart of this city. It rises as the first memorial built on Los Angeles public territory dedicated to the memory of the victims of the Armenian and all other genocides. It is also our community’s expression of gratitude to the United States, the American people, the State of California and this beautiful city.

We expect to continue our cooperation with the authorities of California. We expect to bring our exchanges with the City of Los Angeles closer. We are ready to strengthen our friendship with elected officials in California, many of whom are dedicated friends of Armenia at the pro-Armenian group of lawmakers of California, in the California commission of the Senate, in the mutual trade centers of Armenia and Artsakh, arts and culture exchange centers and of course the Armenian Congressional Caucus.

We will advance in our efforts aimed at deepening the Armenian-Californian cooperation, and the City of Los Angeles will be the main focus for understandable reasons. I am sure that these relations will dynamically develop by encompassing new initiatives and joint efforts.

Thank you everyone for being here today,” the PM said in his remarks.

Mayor Garcetti and others in attendance also delivered remarks.