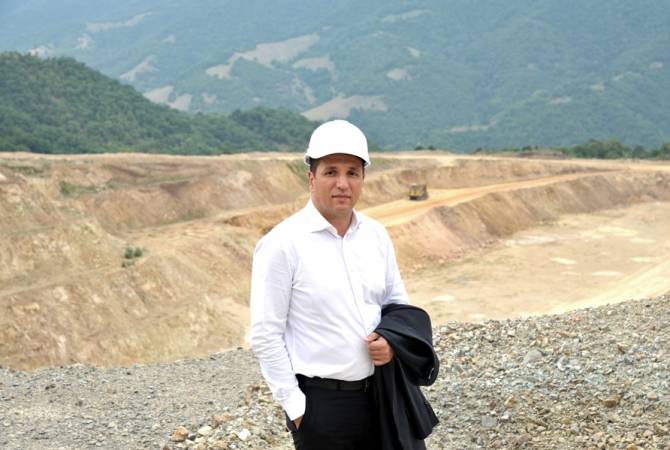 
YEREVAN, SEPTEMBER 17, ARMENPRESS. Teghout Mining, a major Armenian taxpayer and one of the biggest employers in the Lori Province, has been successfully re-launched in a record short period and within minimal budget , Teghout’s Executive Director Karen Ghazaryan said in an interview with Hayastani Hanrapetutyun (Republic of Armenia) newspaper.

“Concentrator and open-pit are fully re-launched in a record short period and within planned minimal budget. We succeeded in developing a young and at the same time skilled team in an unbelievably short period of time, involving nearby community residents , by which we have significantly reduced the existing social burden in the region. We extract and process 7 million tons of ore per annum with high recovery ratio in compliance with the License and permits by the authorized body. Currently we have approximately 950 employees, more than 91% of whom are residents of Lori Province, which is a province-wide solution of a significant social problem. We are also supporting the employees of the Alaverdi Copper Smelter who lost their jobs as a result of the plant’s shutdown, by hiring 50 of them. As part of the Target Community Social Support Program, in cooperation with the Shnogh Community we are funding the fruit gardens planting program further handing them over to the residents of the community in the future. During the past 3-4 years the Company has financed and planted nearly 45 ha of orchards. After re-launch the company  continues carrying out proactive social-oriented activities by constantly supporting and funding various initiatives in the Target community, including, but not limited to  installing street lighting in the Shnogh Community, financial support to the schools, kindergartens, Community Cultural Centers and children’s educational and sport groups in the community (Shnogh, Teghut and Karkop), as well as the Company’s monetary awards for the  children of the community on the occasion of holidays”.

Armenia May Have a Modern Copper Smelter

According to Teghout Mining Executive Director Karen Ghazaryan Armenia’s economy cannot proportionally develop without advanced Industry Sector. “Taking into account the volume of concentrate produced in Armenia it makes sense to build a modern copper smelter in the country. At this moment app.  500,000 tons of copper concentrate is produced in Armenia and Artsakh, which roughly totals 125,000 tons copper annually, which indicates availability of local concentrate produced in Armenia as well as favorable conditions for building a modern copper smelter. Transcaucasia had one major copper smelter – the Alaverdi Copper Smelter – which is not operating at the moment. In this context the One Belt One Road initiative by Chinese President Xi Jinping, where Armenia due to its geographical location is engaged, is of great interest. The fact that Chinese state companies via this Initiative have already carried out hundreds of millions of dollars investments in Kazakhstan, Azerbaijan, Georgia and Belarus, indicates that to have its involvement and benefits Armenia must also have active participation, especially in terms of investment cooperation – by   submitting its own investment projects.

In order to boost the foreign investments in Armenia and make them more appealing the potential investors “should feel protected”. In addition, it is necessary to ease the tax legislation and reduce the tax burden, particularly for the newly founded companies or foreign investors during the first 3-5 years of activities. Although, in this case, the state budget will not receive a certain funds during the first years of operations, instead investors will invest and henceforth transfer huge amounts into the state budget in the future. The main preconditions for investors – “clear rules of the game”, as well as the “environment of certainty” and “fair judicial system and courts.”. Businessmen must be sure that upon facing an obstacle they can protect their rights in higher government authorities and/or by following the procedures prescribed by the law.”

Karen Ghazaryan is known in business circles as a well-known expert of the financial, investment and mining industry sectors, Director of a Russian Investment Fund, which has executed multimillion investments in Armenia and other CIS countries.

Regarding the industries in Armenia, which are of interest to him as a businessman and whether there are sectors where he is willing to invest, Mr. Ghazaryan informed that he implements his own projects of solar parks. First, a 2 MW solar photovoltaic station is currently under construction in the Kotayk Province, which is planned to be commissioned in Q4 of 2019, and the next investment projects is the construction of a 5 MW solar park in the Gegharkunik Province.

Karen Ghazaryan is an alumnus of the Yerevan State University’s Economics department and holds a Ph.D. in Economics. He is also a graduate of the Maxwell School of the Syracuse University, (Syracuse, New York) with M.A. in Economics (Finance minor). Mr. Ghazaryan also completed the Mergers and Acquisitions training program at the Harvard Business School. Prior, he was a graduate of the Edmund S. Muskie Fellowship and Junior Achievements Programs.

He is the author of numerous articles and publications, which have been published in Armenia, the United States and Russia and has been active in the investment and financial industry in the United States and Russia for more than 18 years. Karen Ghazaryan is known in Denmark, Russia and CIS countries with his successful M&A deals, and in Armenia as a successful turnaround executive  who has raised tens of millions of dollars, and the projects/companies under his management have achieved best in class operational and financial results.