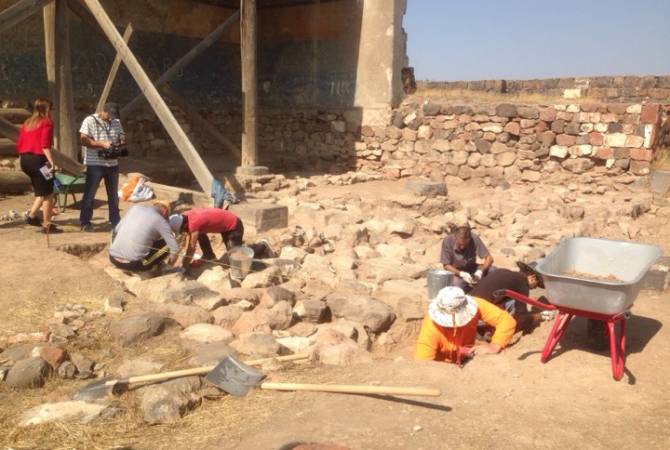 
YEREVAN, SEPTEMBER 16, ARMENPRESS. The foundation of a new temple has been discovered at the Erebuni Fortress in Yerevan by a joint Armenian-French expedition team, bringing the number of temples at the site to three, which in turn enables to label it as a “cultural-historical complex”.

A gravel ground mosaic existed in front of one of the temples, which makes scientists assume that during times of Urartu there was a tradition of holding certain rituals in front of the temples, archaeological expedition team leaders Stefan De Champ and Erebuni Museum Director Michael Badalyan told a press conference.

“These excavations are important not only for Armenia’s history and archaeology but for the archaeological study of the entire Ancient Middle East. The excavations prove that we must re-value what we know about Erebuni,” Badalyan said.

“The temple’s existence proves that at some point the Erebuni religious site had three shrines which functioned simultaneously – the Khald temple, the Iyubsa temple and the newly discovered temple with powerful foundations. The fantastically beautiful gravel ground mosaic in front of Iyubsa temple was also interesting,” he said.

Yerevan City Hall Department of Culture Director Gor Sargsyan said the iconic fortress must become one of the top tourism destinations in 2020.

French Ambassador to Armenia Jonathan Lacote highlighted the cooperation between Armenian and French archaeologists in terms of experience exchange and cooperation in academic field. He also noted that he has numerously visited the Erebuni Fortress.

“I came here two weeks after being appointed ambassador because I wanted to see the area by the name of which Yerevan is called”.

Armenian and French archaeological teams are carrying out excavations at the site since 2008.