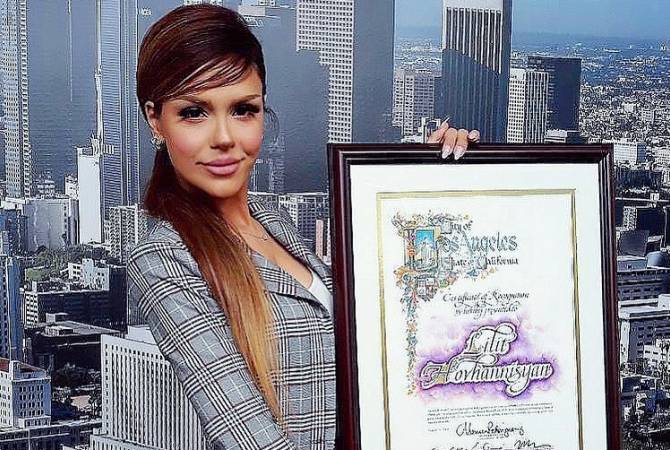 
YEREVAN, AUGUST 24, ARMENPRESS. Lilit Hovhannisyan has become the first ever Armenian artist to be awarded a Certificate of Appreciation by the City of Los Angeles.

Pop star Lilit Hovhannisyan was awarded the honor by the LA City Council for including the city of Los Angeles in her ongoing Dream World Tour, organizing an excellent concert and promoting the Armenian culture and arts on a top level.

Los Angeles City Councilmember awarded Hovhannisyan the certificate during a City Council session. All members of the City Council were in attendance in the televised ceremony.

Lilit Hovhannisyan thanked the Councilmembers and emphasized that Los Angeles has a special place in the Armenian community’s life.

“This kind of appreciation by the Los Angeles City Hall has great meaning and importance for me. As a result of the Armenian Genocide 1,5 million Armenians were killed, and thousands of Armenians sought a second homeland in different countries around the world. Los Angeles is one of the cities which took in Armenians after the genocide. I am grateful to this city not only for this certificate, but also the warm attitude towards my countrymen during different times,” the pop star said at the event.

As part of her Dream World Tour Hovhannisyan has already performed in Kuwait, France, Denmark, Sweden, Germany, Austria and other countries.