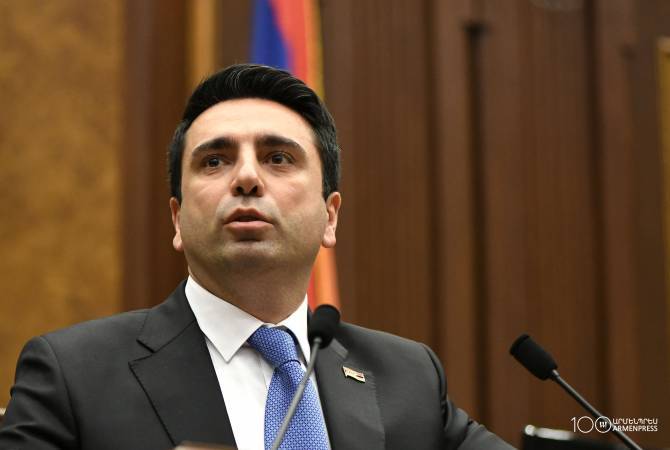 
YEREVAN, AUGUST 19, ARMENPRESS. Vice President of the National Assembly of Armenia representing the ruling ‘’My step’’ faction Alen Simonyan assures that even if there is the slightest suspicion that exploitation of Amulsar mine can pose any risks to Jermuk city of Lake Sevan, it will not be exploited.

''I think today in the evening the PM will make an announcment. Let's wait for the future developments'', ARMENPRESS reports Simonyan said on August 19, following the closed meeting of ''My step'' bloc.

To the question what position the Government has for the solution of the issue, Alen Simonyan said that there is a situation when the research says something, but the environmentalists says the opposite.

''We said during the pre-election campaign and now say that if there will be 0.1% suspicion that Jermuk and Lake Sevan will be affected by the exploitation of the mine, it will not be exploited. Today there is the conclusions of the research and the Government acknowledged it and will present its position'', Simonyan said.

Still in 2014, when the Republican Party was in power, Lydian Armenia was granted with the permission to exploit Amulsar mine. The company started the construction of mine facilities and by 2018 it had completed nearly 80% of the works. Following the revolution of 2018, Amulsar issue was in the center of attention of the new Government and based on the concerns raised by environmentalists and experts a criminal case was initiated in July 2018a against an official who concealing important information about ecological risks. ELARD company together with TRC company carried out the research in the sidelines of the criminal case, for which the Government of Armenia paid nearly 400 thousand USD.

According to the research, the exploitation of the mine will pose no serious risks to environment.