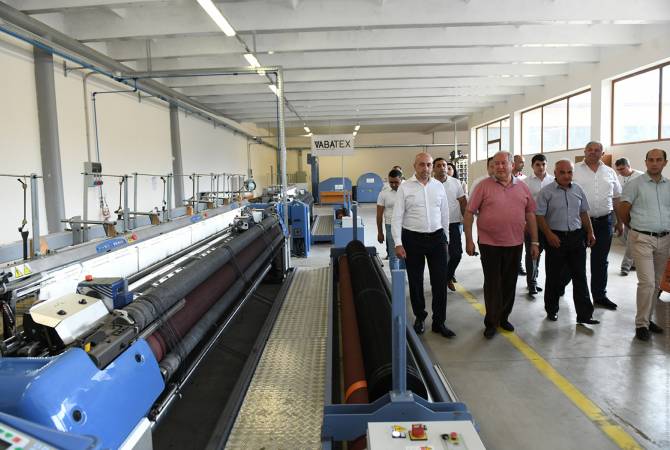 Accompanied by company director Armen Gharajyan, the President toured the factory, got acquainted with the production capacities, the technologies used and the production. It was reported that the factory is equipped with Italian equipment, high technologies are being used. The nets produced protect the crop not only from hail, but also birds, insects and also maintain the temperature.

Introducing the production volumes, the programs on expanding and exporting the products, the company representatives stated that they still face a problem of production realization in the Armenian market, as well as need a subsidy.

After the tour the President told reporters that the production of the company should not be viewed just as an anti-hail network, it has quite a complex protective significance for orchards.

“This is a modern technology that is used all over the world. They not only protect from hail, but also form a respective micro-climate. A modern production has been established which also can export the products, but it’s a pity not to use the good produced in Armenia, especially in the south, starting from the Ararat plan where orchards need protection”, the President said, adding that it is necessary to encourage the people to use the technological production produced in our country which will be really useful for the rural economies. Armen Sarkissian also expressed readiness to provide assistance to the company as much as possible.