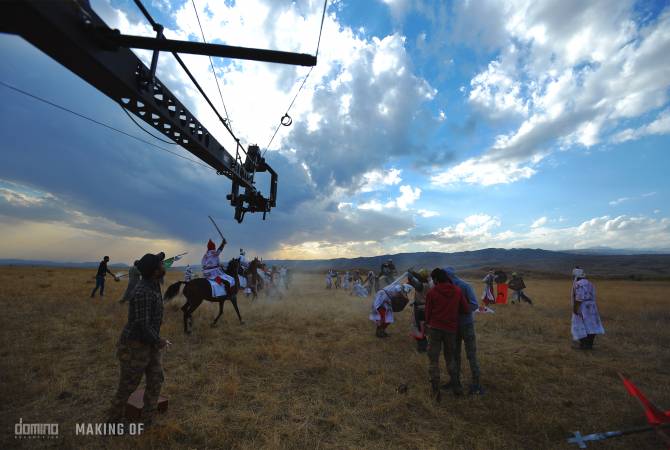 
BEIRUT, JULY 18, ARMENPRESS. The private premiere screening of a mood reel trilogy “Cilicia: The Land of Lions,” depicting the glorious history of the Kingdom of Cilicia, took place at the Metropolis Empire Sofil movie theater in Beirut, Lebanon, on the 17th of July. The elite of the entertainment scene in Lebanon were present at the screening and post reception, reports Armenpress.

The project was initiated by the Khatchadourian Family of Lebanon and KOHAR to contribute to the preservation and dissemination of the glorious history of the noble Armenian Kingdom of Cilicia. KOHAR has always been devoted to the promulgation of the Armenian cultural heritage, and this cinematographic work aims to disseminate the untold story of the Glorious Armenian Kingdom of Cilicia.

“This project aims to keep the memory of the powerful and proud Kingdom of Cilicia alive and vivid in the minds of current and future generations. The history of Cilicia will find a great reaction among the Armenian diaspora, particularly those living in Lebanon, as Cilicia is the historical motherland for almost all of us. The flags of the Cilician Kingdom that were proudly waved by the audiences during numerous KOHAR concerts is now waved on the screen in the hands of historical figures,” said Harout Khatchadourian.

“Cilicia: The Land of Lions” is a mood reel trilogy that showcases one of the most significant chapters of the Armenian history, the Kingdom of Cilicia, during its three-century-old existence (1080-1375). It was produced in accordance with the modern standards of a history genre film production, using advanced technologies. This project is the first of its kind in the Armenian market. The producing company is Domino Production, based in Armenia.

“The shooting of the mood reel trilogy took a long time as it would take a feature film, but our aim was to create a high-quality cinematographic piece that will claim its position in the contemporary world of film production and make Armenia recognizable as a country with a great potential to be a part of the international film industry. All the scenes were shot in Armenia: from battlefields to the naval battle, which we filmed on the famous "Cilicia" boat. The mood reel is rich in powerful visual effects and computer graphics,” said the director of the mood reel trilogy Ashot Arakelyan.

The mood reel trilogy has been produced based on historical facts. However, for artistic and dramatic purposes, some of the historical episodes are presented with the unique approach of the director. The primary condition when selecting the cast was the charisma of the character rather than the fame of the actor or actress. The characters and all the historical events are based on the rich historical archives and we recreated in consultation with a history expert. The special drama and the essence of the Middle Ages presented in the film are more emphasized with the original soundtrack performed by KOHAR Symphony Orchestra and Choir.

Established at a time when the Armenian people did not have statehood, a new Armenian princedom was established on the Mediterranean coast in the land of Cilicia. The three centuries of breathtaking history of the Cilician Kingdom were more than sufficient to leave a lasting mark in the pages of history and the hearts of all Armenians.

The first mood reel introduces the first part (1080-1198) of the three-century-old history of Cilicia, from the founding of a princedom in the 11th century to the rule of one of the greatest Armenian royals – King Levon the Roupenid – to Cilicia’s participation in the Crusades and the establishment of the Cilician Kingdom.

The second mood reel refers to the historical events taking place in the 13th century, providing an insight into the relationship among the nobles and the change in the royal dynasties from Roupenids to Hetoumids, with  Queen Zabel I, marrying her regent, Constantine of Baberon’s son: the founder of Hetoumids' dynasty – King Hetoum I.

The third and the last of the mood reel trilogy presents the final years of the Kingdom (1219-1375) beginning with the reign of King Levon III, when Cilicia was torn apart from all four sides of the kingdom, to King Levon V, the last king who came from the Lusignan dynasty; his burial is depicted in the last scene of the mood reel.

This is the first and the only cinematographic work that narrates the history of Cilicia and has an ambitious aim to be presented in the international film market.

The grand premiere of “Cilicia: The Land of Lions” mood reel trilogy will take place in Armenia in the near future.