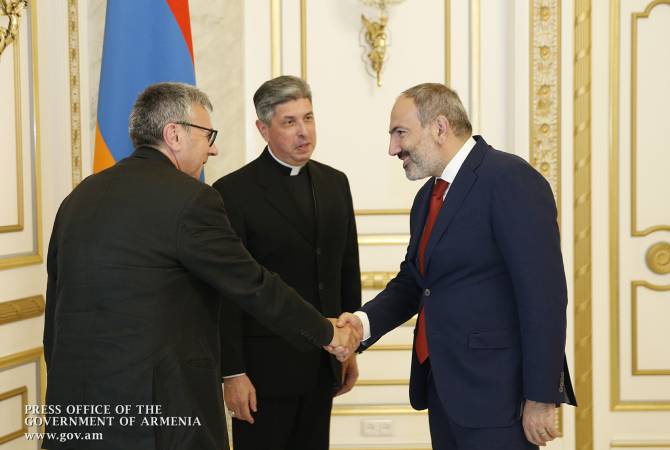 As ARMENPRESS was informed from the Office of the Prime Minister of Armenia, welcoming Archbishop José Avelino Bettencourt to the Government of Armenia, the Premier praised his considerable efforts toward strengthening relations between Armenia and the Holy See. In Nilol Pashinyan’s words, cooperation between Armenia and the Vatican is underpinned by high-level political dialogue as evidenced by the good dynamics of reciprocal visits and top-level official meetings. The Prime Minister said Armenia is eager to build on the deeply-rooted bilateral relations and strengthen the ties between the Armenian Apostolic Church and the Roman Catholic Church. Taking the opportunity, the Head of Government introduced the reform process underway in our country.

Thankful for the warm welcome, the Apostolic Nuncio emphasized that ever since our country’s independence, Armenia and the Vatican have entertained privileged relations, which continue to develop effectively. José Avelino Bettencourt said he was pleased to be in our country during a period of historical changes and went on to assure that the Holy See was ready to assist Armenia on the way to development and progress.

The parties reviewed the prospects for establishing closer relationships between Armenia and the Vatican. The Prime Minister noted that the ongoing close cooperation between our country and the Vatican is based on shared Christian values and on the fact that they have a common historical heritage and, as the first Christian country, Armenia attaches particular importance to the ties with the Holy See.

Nikol Pashinyan emphasized that the international recognition and condemnation of the Armenian Genocide is important in terms of preventing the recurrence of genocides and other crimes against humanity.