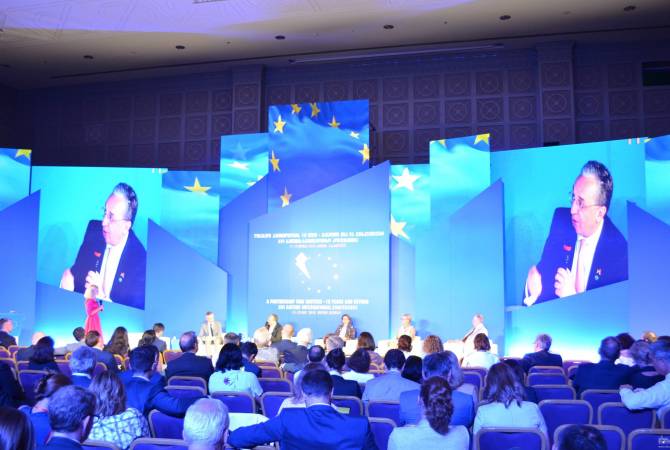 
YEREVAN, JULY 11, ARMENPRESS. Turkey refuses to establish diplomatic relations with Armenia and continues the policy of isolating Armenia accomponied by denying the justice and this is a security threat for Armenia, Foreign Minister of Armenia Zohrab Mnatsakanyan announced during Batumi international conference in Georgia on July 11, dedicated to the 10th anniversary of Eastern Partnership.

As ARMENPRESS was informed from the press service of the MFA Armenia, speaking about the Eastern Partnership, Mnatsakanyan said that it's not just a region neighboring Europe, but is part of Europe based on common values. ''Those are our shared values that we chose as the basis of our state building since the 1st day of declaration of independence in 1991. When we develop a bill, we send it to the Venice Commission but not to some other institutions, since we want to observe the compliance of the bill with the European standards'', FM Mnatsakanyan said.

Zohrab Mnatsakanyan emphasized that 2018 was a year of serious progress for Armenia which was absolutely about Armenia and was in no way conditioned by geopolitics. ''What happened in Armenia was not a geopolitical development. There is no need to search any external pretext in the domestic political processes of Armenia, since they just don't exist'', he said.

Speaking about the security challanges facing the Eatern Partnership participant countries, the Armenian Foreign Minister said, ''Turkey is a security threat for Armenia. It's already 27 years that Turkey refuses to establish diplomatic relations with Armenia and continues the politicy of isolating Armenia, accomponied by the denialism of justice. For us it's a security threat''.