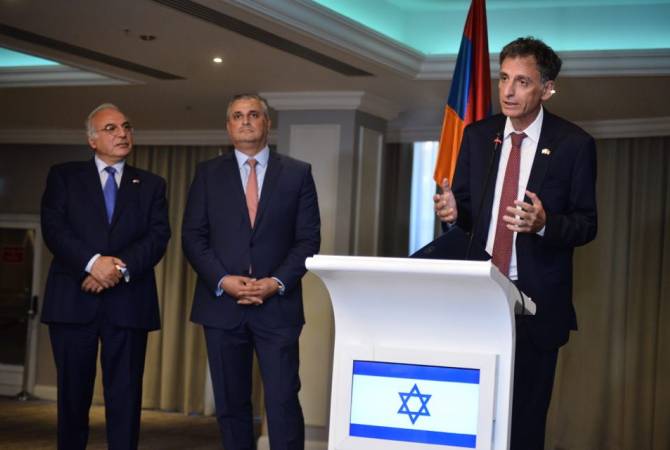 
YEREVAN, JULY 11, ARMENPRESS. Armenian deputy foreign minister Grigor Hovhannisyan says Armenia and Israel can raise the relations to a new level. In his turn Ambassador of Israel to Armenia Eliav Belotserkovsky (residence in Jerusalem) says the two countries have many similarities.

On July 10 an event dedicated to the 71st anniversary of the independence of Israel was held in Yerevan.

“There are many common episodes and mutual contacts in our history and culture. The list of similarities between Armenia and Israel is really impressive and long. We both are small nations with ancient history and are located in complex geopolitical regions”, the Ambassador said.

He added that extermination attempts have been made against the two nations.

Eliav Belotserkovsky said both Israel and Armenia attach great importance to education, both also have a great Diaspora. He said he visited Armenia together with his wife four years ago, they visited ancient monasteries, churches, but states that the best part of the visit was the contact with the hospitable people. The Ambassador noted that after that visit they were convinced that they will definitely return to Armenia.

The Armenian deputy FM said in recent years activeness is noticed in the Armenia-Israel relations. He added that he is happy for Belotserkovsky’s appointment as Ambassador because he is a skilled diplomat, and there are hopes and expectations in this regard.