Armenia, Vietnam to deepen cooperation in a number of areas -Nikol Pashinyan meets with Vietnam’s Pr 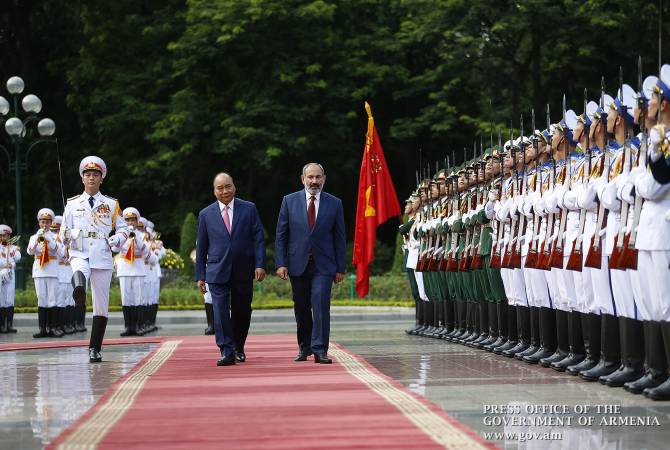 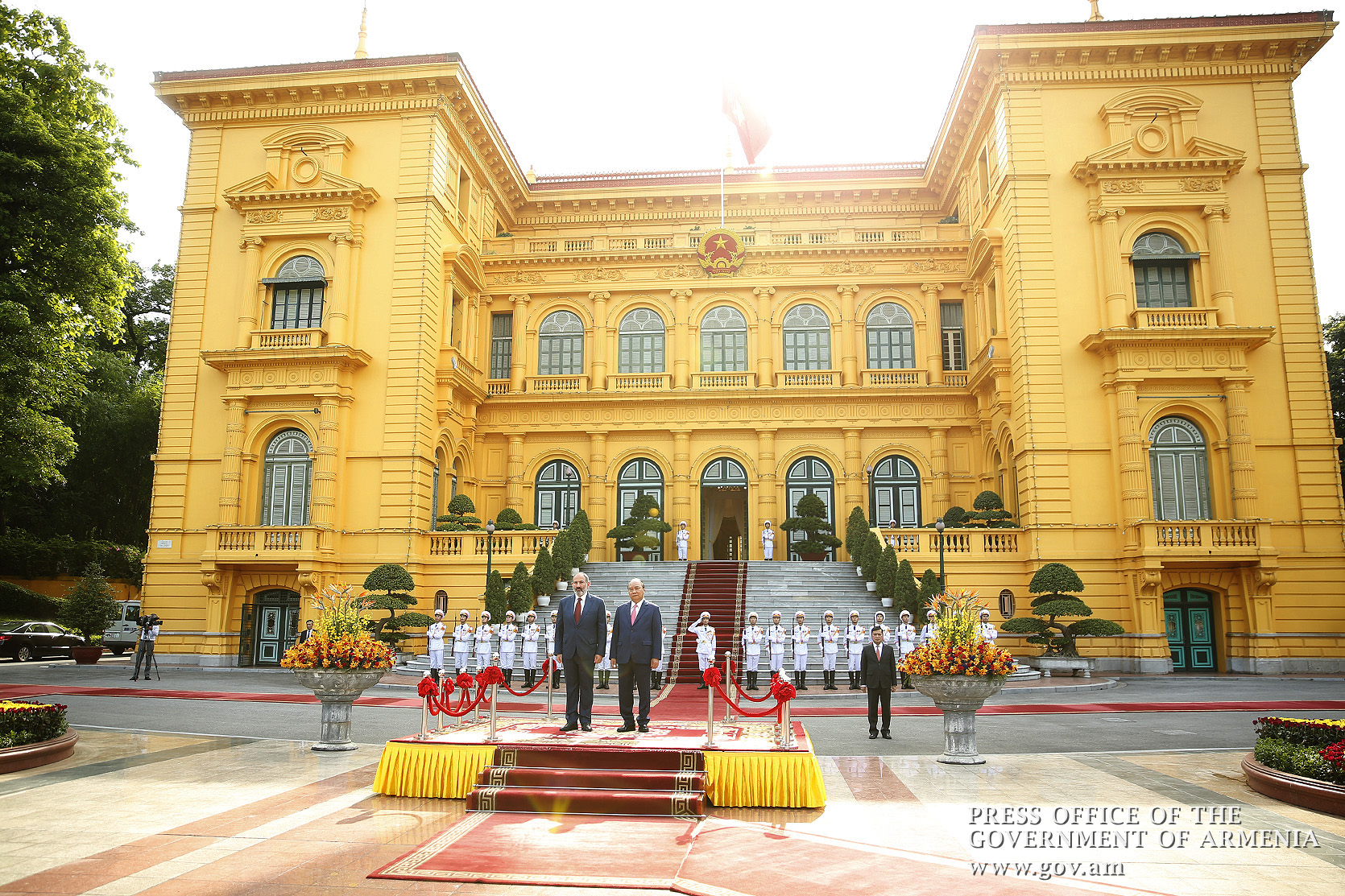 An official welcoming ceremony was held for Prime Minister Pashinyan and Mrs. Anna Hakobyan. The prime ministers of the two countries and their spouses welcomed the respective delegations, after which the national anthems of Armenia and Vietnam were played, followed by the march of a guard of honor. 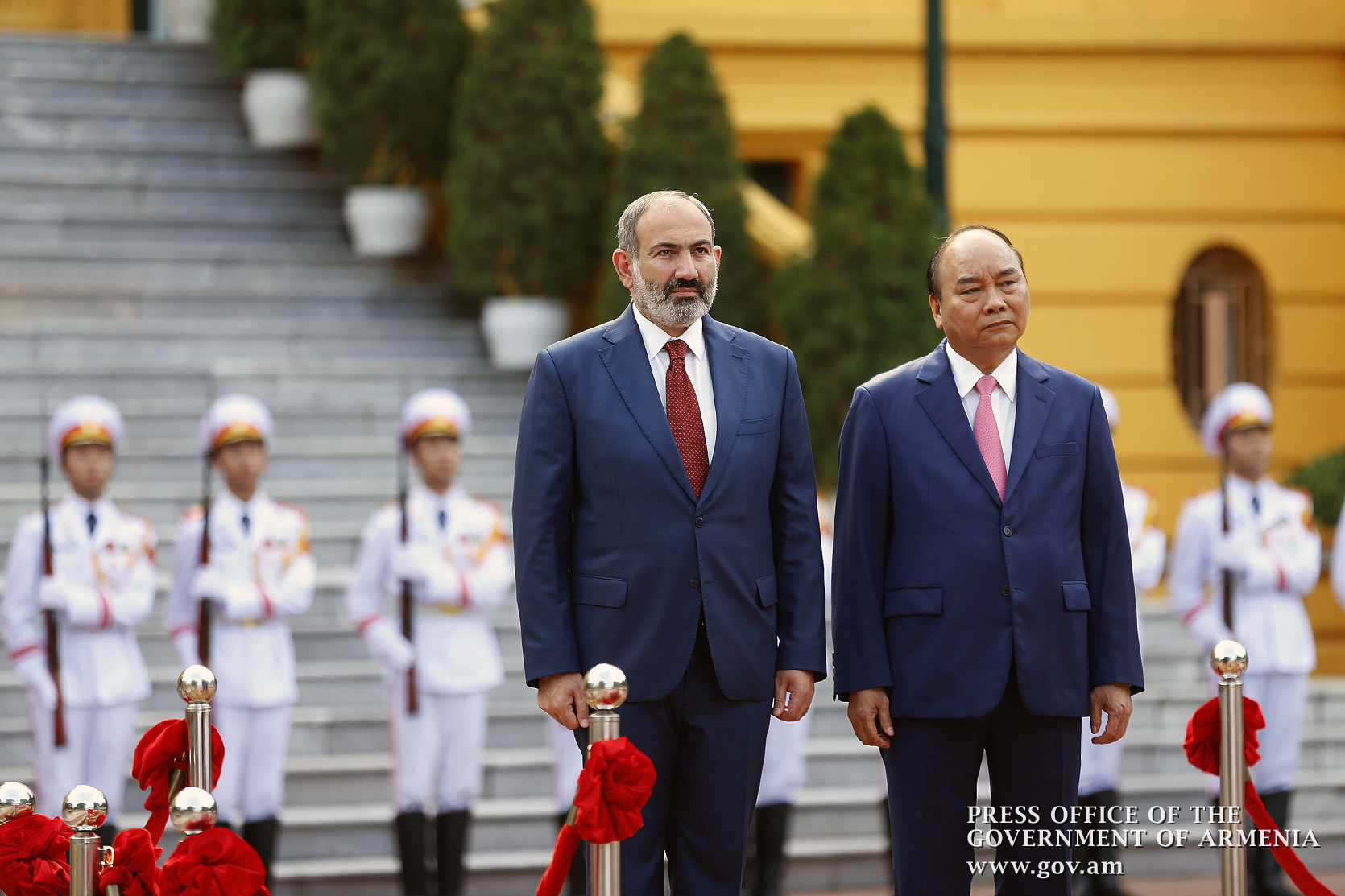 After the protocol photo session, negotiations were held in narrow and extended formats.

The Prime Minister of Vietnam personally welcomed Nikol Pashinyan’s delegation on behalf of the government of his country and himself, noting: “I am confident that our meeting will promote the development, expansion and strengthening of cooperation in all spheres. Mr. Prime Minister, it is emblematic that you are visiting Vietnam on the 60th anniversary of the landmark visit paid to Armenia by founder of the Socialist Republic of Vietnam Hồ Chí Minh. We are glad that Armenia has overcome difficulties and is taking steps towards economic development, which is sure to enhance Armenia’s standing in the international arena.”

Nguyễn Xuân Phúc expressed conviction that the Armenian Premier’s visit will boost the ongoing bilateral mutually beneficial cooperation. The Vietnamese Prime Minister noted that numerous Vietnamese citizens have been educated in Armenia in the Soviet era and have contributed to the country’s progress with their knowledge. 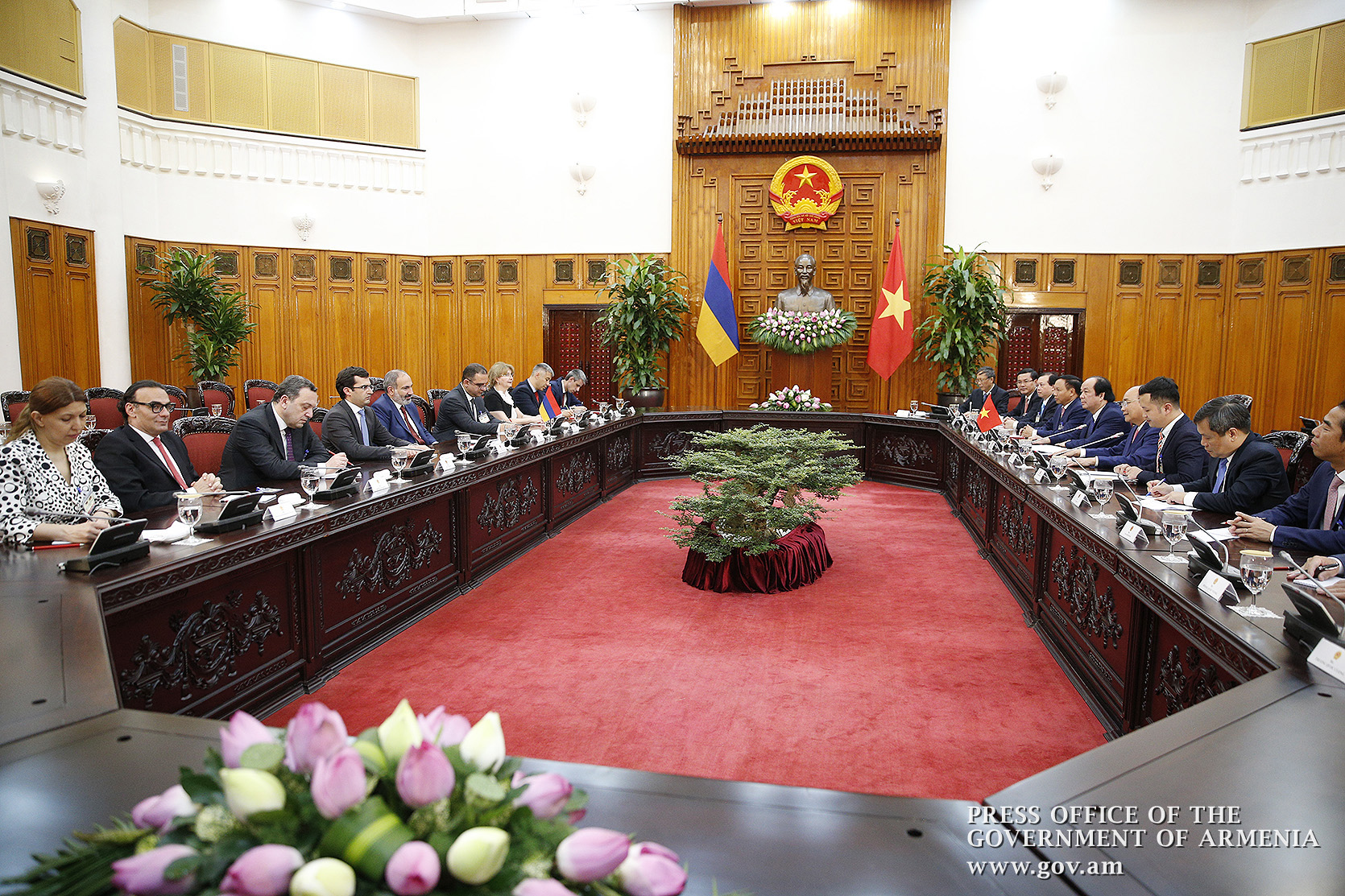 Thankful for the warm welcome, Nikol Pashinyan noted that his visit aims to promote the Armenian-Vietnamese political, economic and humanitarian ties.

“We will discuss a wide range of issues and I am confident that our decisions will contribute to the development of our states. The distance between our countries cannot be an obstacle to the development of cooperation,”Nikol Pashinyan said. According to the head of the Armenian government, the two countries are well-poised to expand relations and the governments should take specific steps to tap the existing potential. 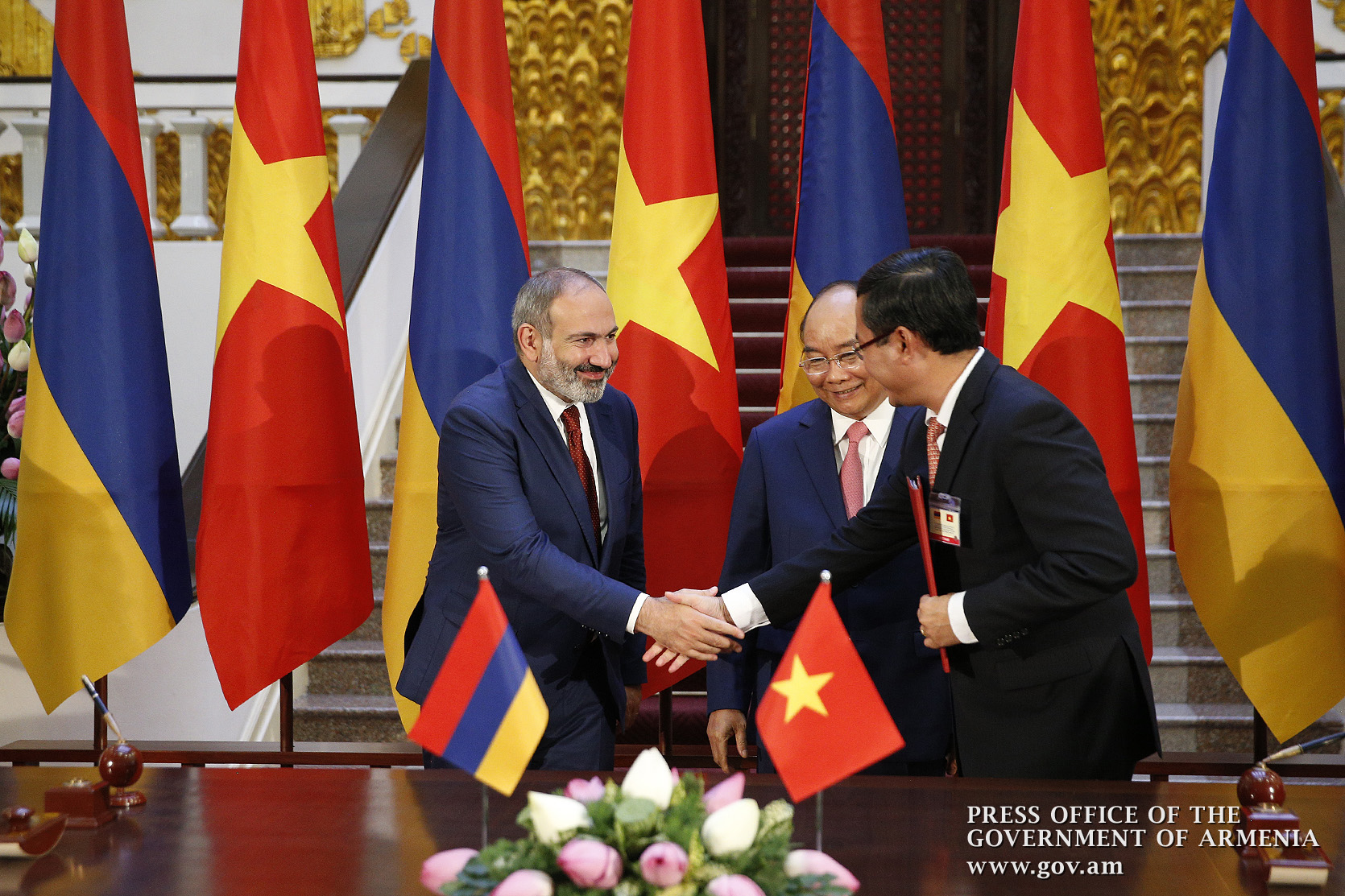 The parties discussed issues related to the promotion of trade and economic ties, cooperation in information technologies, including engineering laboratories, tourism, healthcare, education, science, and environmental protection. Touching upon the expansion of trade and economic ties, the interlocutors prioritized the active work of the intergovernmental commission. An arrangement was made to hold a business forum on the sidelines of the upcoming session of the intergovernmental commission, due this fall in Yerevan. Both sides expressed confidence that it would impart fresh impetus to the development of joint investment programs and economic cooperation between the two countries. Reference was made to the possibility of importing Armenian brandy and wine into the Vietnamese market.

Nikol Pashinyan and Nguyễn Xuân Phúc agreed to start discussions over the signing of an agreement on avoidance of double taxation. The parties expressed conviction that the creation of a free trade zone between the Eurasian Economic Union and Vietnam will catalyze the development of economic cooperation.

The two prime ministers stressed the need for expanding cooperation in tourism and highlighted the steps taken to facilitate the visa regime. They highlighted the development of the applicable legal framework and the furtherance of direct contacts between the regions and the trade chambers of the two countries.
Reference was made to the ongoing cooperation within the framework of international organizations, including the UN and the International Organization for Francophonie, as well as other issues of mutual interest.

Following the talks, the governments of the Republic of Armenia and the Socialist Republic of Vietnam signed an agreement on cooperation in the field of education and science. Attended by Nikol Pashinyan and Nguyễn Xuân Phúc, the agreement was signed by RA Deputy Foreign Minister Avet Adonts and Deputy Minister of Education and Training of Vietnam Nguyễn Vân Phúc.

In conclusion, the two heads of government summed up the outcome of their talks in a joint statement made for mass media representatives.

On behalf of the Government of Vietnam, I am pleased to welcome the Prime Minister of Armenia and his delegation, who have brought along warm feelings from the Armenian people.

The Government and the people of Vietnam have always treated with love and respect the brotherly people of Armenia. We are glad that Armenia has successfully defied the emerging challenges under Mr. Prime Minister’s leadership to embark upon the path of development.

You are taking specific steps to improve Armenia’s political life, economic position, and enhance your country’s role in the international arena.

The Vietnamese leadership attaches great importance to the strengthening of friendship and cooperation with Armenia. We have just completed our negotiations, at which we discussed specific areas and steps to promote cooperation between the two countries. We have held successful negotiations and have exchanged sincere and open ideas on many issues.

We agreed to continue active cooperation on the level of governments, parliaments, as well as to facilitate direct contacts between our business communities and citizens.

We have agreed to improve the intergovernmental commission’s activities, trade-economic and scientific-technical cooperation, promote implementation of the free trade zone agreement between Vietnam and the Eurasian Economic Union, considering it as a solid basis for bilateral economic relations.

We also agreed to expand cooperation in other areas, such as education, healthcare, culture, sports, tourism and security.

We discussed in all detail the steps aimed at implementing the free trade zone agreement between Vietnam and the EAEU, and I consider it one of the most important issues of cooperation between our countries. Specific undertakings were made in the field of tourism and defense.

We agreed to cooperate and support each other in international formats and discuss issues of common interest, including the settlement of key issues in the Asia-Pacific region on the basis of international law.

The Government of Vietnam appreciates and is confident that the first visit of the Prime Minister of Armenia is a qualitatively new step on the way to strengthening and developing relations between Vietnam and Armenia.

Thank you, Mr. Prime Minister and your delegation, for this official visit.”

First of all, I wish to thank Prime Minister Nguyễn Xuân Phúc for the warm welcome shown to the Armenian delegation.

I want to reaffirm that we have held constructive talks, which went off in an atmosphere of mutual trust. We exchanged opinions on the bilateral agenda, discussed key issues of cooperation in political, trade, economic, cultural, humanitarian and other spheres.

I am convinced that the mutual respect and traditional friendship will help us unleash the potential inherent in Armenian-Vietnamese cooperation, expand and deepen trade and economic ties and implement joint programs.

We are striving to diversify our foreign economic cooperation. As a friendly country, Vietnam is an important partner for Armenia in the Asia-Pacific region.

I want to note that we are impressed by Vietnam’s economic progress, its macroeconomic achievements and the level of regional and global integration. For its part, Armenia has something to offer. A wide range of our foreign economic relations can be of serious interest to Vietnamese producers. Armenia can serve as a bridge between the European Union, the CIS countries, Georgia, Iran and the Middle East.

Here, I should note that as a result of decisive measures over the last year we were able to qualitatively change the economic and investment environment of our country. There are no obstacles to the activities of foreign companies in Armenia. A business-friendly environment has been created. All necessary legal mechanisms have been set up to protect the assets of foreign investors and boost their activities.

During the negotiations, both sides expressed willingness to take steps toward the furtherance of relations in the spheres of mutual interest. Armenia and Vietnam boast strong cooperation potential in education, healthcare, tourism, textile industry, information technology, science and innovation.

In this regard, we highlighted the activities of the intergovernmental commission on economic, trade and scientific-technical cooperation. This is an important tool of cooperation, which we must use fully.

We agreed to hold a session of the Armenian-Vietnamese intergovernmental commission and a business forum in October. In the wake of this visit, we will start discussions over the signing of an agreement on avoidance of double taxation. We are going discuss the possibility of signing a specific memorandum concerning the tourism industry.

The mutual recognition of each other’s certificates between Armenia and Vietnam is also important.

We also affirmed our commitment to expanding cooperation in the EAEU-Vietnam format. We must take all the necessary steps so that the free trade agreement with the EAEU might go in tune with the development of economic interaction between our countries.

Key issues of international and regional policy were also discussed. We touched upon our collaboration within the framework of international organizations and reaffirmed the readiness of the two countries to respect each other’s interests.

In conclusion, I would like to once again thank the Prime Minister of Vietnam, our Vietnamese colleagues and friends for hospitality and effective negotiations.”