Armenian football going to have a serious future – FFA President 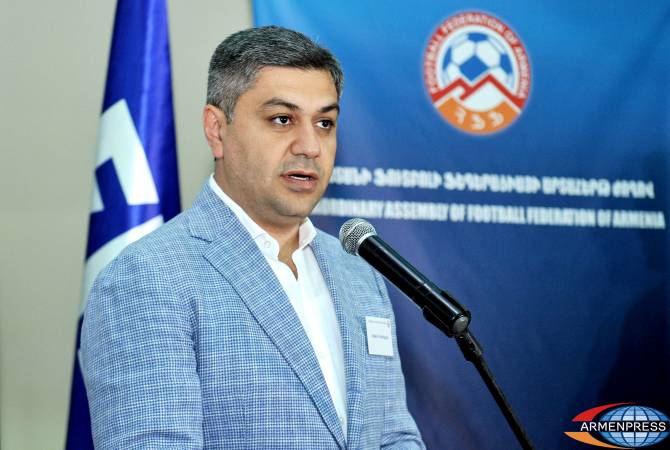 
YEREVAN, JUNE 26, ARMENPRESS. During the congress of the Football Federation of Armenia (FFA), FFA President Artur Vanetsyan in his remarks touched upon the future actions of the Federation, the vision on the development of football and the upcoming programs.

“I assumed the position of the President of the Football Federation on September 22, 2018, and starting from that day large-scale work has launched in the Federation which already has tangible results. I have announced that the FFA will pay a great attention to the provinces, and as one of the most serious projects we started building football fields with artificial turfs. This is a perfect way of promoting massive football”, he said.

Next month the Federation is going to launch 26 out of these football fields in Ararat, Vayots Dzor and Gegharkunik provinces. 26 more football fields will be built in the next 4 months. A total of 1.5 million USD has been required for this project. In line with this, the FFA will start working in the direction of additional 26 football fields which will cost 750.000 USD. The FFA President expressed hope that they will manage to build the additional fields during this year.

Commenting on the work of FFA technical director Gines Melendes, Artur Vanetsyan said the positive results of his work are already visible since the day of starting working in Armenia. “I have personally met with him several times and discussed the future of the Armenian football. And now I have a confidence that our football will have a serious future. We are making serious institutional changes in the football thanks to Gines Melendes”, Vanetsyan said.

He noted that the new projects increase the financial burden, but added that the Federation is ready to solve these problems. “We carry out major works to create women’s national team and make the women’s participation one of the priority directions. Great attention is also paid to futsal”, he said.

Vanetsyan said club football is also developing in Armenia, although there are some problems. “Most of the clubs mostly do not make investments in infrastructures. This is a serious issue, and now we are changing the policy of providing infrastructures. We are not building and donating them to the club, but are implementing a joint investment program with those who have a wish”, he said.

He also praised the recent two victories of the Armenian national team and noted: “We hope this success will further develop, and we, the FFA and I personally, will always stand together with the players and coaches”.