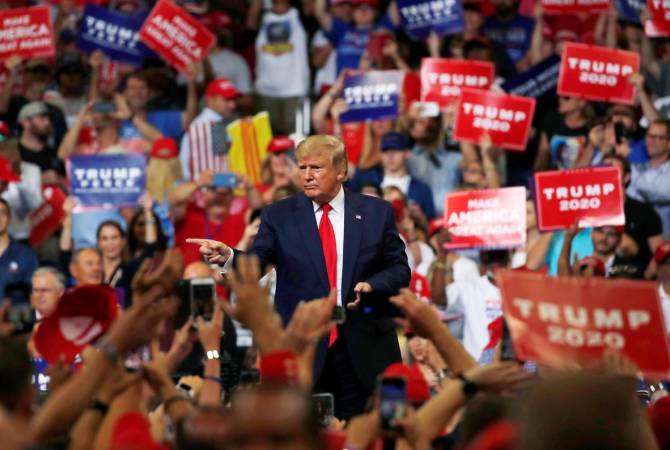 At a packed rally at an arena in Orlando, Florida, Trump made clear he would run for re-election as an outsider, just as he did in 2016.

He revisited campaign themes from four years ago, decrying illegal immigration, the news media and his 2016 Democratic opponent, Hillary Clinton, according to Reuters.

“Together we stared down a broken political establishment and we restored government by and for the people,” Trump said. “As long as you keep this team in place, we have a tremendous way to go. Our future has never looked brighter or sharper.”

Democrats “want to destroy our country as we know it” and that it’s “not going to happen,” Trump said.

“We believe our country should be a sanctuary for law-abiding citizens, not for criminal aliens,” he said.

Two dozen Democrats are competing for their party’s nomination to face off against Trump in the November 2020 election. Many of the top Democrats lead Trump in opinion polls in battleground states.

Trump called his opponents a “radical left-wing mob” who would bring socialism to the United States.

“A vote for any Democrat in 2020 is a vote for the rise of radical socialism and the destruction of the American dream,” he said.

“Tonight I stand before you to officially launch my campaign for a second term as president of the United States,” Trump said. “I promise you I will never ever let you down.”

Over the course of a speech that lasted an hour and 20 minutes, Trump blasted the news media as “fake news,” took credit for a strong economy, said he was putting the heat on China on trade, promoted his proposal for a “space force,” vowed to protect Americans’ rights to own guns and said he wanted to launch a space mission to Mars.

Trump also declared himself a victim: “We went through the biggest witch hunt in political history,” said Trump. “It was all an illegal attempt to overturn the results of the election,” he said about the Special Counsel Robert Mueller’s investigation into Russian interference in the 2016 election.

The 2020 United States presidential election is scheduled for Tuesday, November 3, 2020.