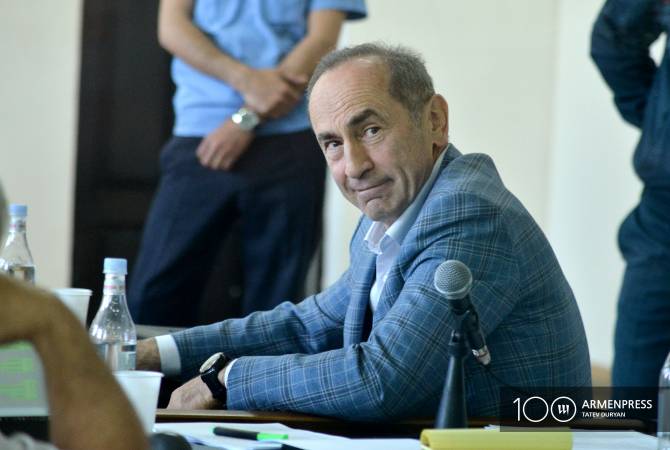 
YEREVAN, JUNE 12, ARMENPRESS. Ex-President Robert Kocharyan has filed a peremptory challenge of judge against Judge Armen Danielyan who is presiding over the ongoing hearing of the General Prosecution’s appeals against the former Armenian leader’s release from custody and the suspension of the March 1 trial. The March 1 trial was suspended by another judge and sent to the Constitutional Court for validation earlier.

Kocharyan’s attorney Hayk Alumyan filed the motion requesting Judge Danielyan to recuse himself. Alumyan accused the judge of being “the judge who seldom makes rulings that contradict the prosecution’s stance”.

Kocharyan’s lawyer said the judge was given the case in “suspicious circumstances”.

Kocharyan himself took the floor and reiterated the peremptory challenge. “I am urging you to also understand that in this case it is extremely important to dispel this kind of suspicions, and it is impossible to do so without a recusal,” he told the judge.

The prosecution objected the motion and said Kocharyan’s arguments do not constitute grounds for requesting a recusal.

Kocharyan, as well as several other ex-officials, are charged with “overthrowing constitutional order”. The former president is accused in unlawfully ordering the military to intervene in the 2008 unrest. He is also charged with bribery.

He was jailed for around 6 months in pre-trial detention before controversially being released in May.