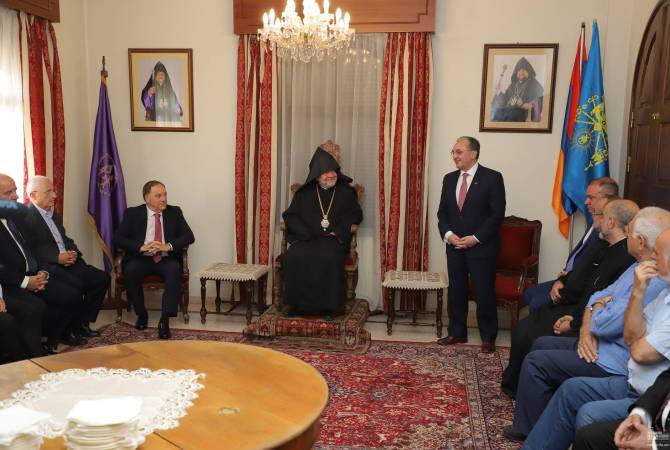 At the meeting Archbishop Khoren Doghramadjian highlighted the importance of such meetings which, according to him, are a good opportunity to discuss the developments relating to Armenia and the Diaspora’s issues of concern.

In his remarks minister Mnatsakanyan highly valued the role of educational and spiritual structures of the Armenian community in terms of preserving the national identity and strengthening the Armenian-Cypriot centuries-old friendship. He expressed hope that the complete use of the community’s potential will enable to further expand and enrich the political agenda between Armenia and Cyprus.

“There is much more meaning in the basis of the relations with Cyprus: this is a friendship of peoples who represent civilizations, who have a very good memory, a deeper feeling of history, and this friendship has been built on these civilizational bases”, the Armenian FM said.

He specifically highlighted the role of the Armenian community in these relations. “In our case Diaspora is not a group of people who gather once a year to drink a coffee, but a body containing institutional bases. How many people are in the Armenian community is not the matter, the matter is that you are represented with deep institutional structural bases aimed at preserving what is very important for us – our national identity”, he added.

Introducing the purpose of his visit and the agenda of the June 4 trilateral meeting, as well as the cooperation prospects in this format, the Armenian FM stated: “My visit aims at creating a new Armenia-Cyprus-Greece trilateral cooperation which is quite promising and has a huge potential”.

“We have very promising agenda in the fields of innovations, high technologies, creative education where we propose to expand the cooperation frameworks. And I hope that from now on we can enlarge the sectoral partnership”.

The foreign minister also touched upon the recent domestic political changes in Armenia and the government’s ongoing reforms, as well as Armenia’s foreign policy priorities.

“Major developments have taken place in Armenia since the Velvet revolution of April-May 2018. We touched upon our domestic problems, showed the ability and power of the state and state-public institutions. The people’s fight, which led to the peaceful, velvet revolution, didn’t destroy the foundations of the state, but only contributed to its strengthening. For 27 years we have built a country which I will call a country of a European model. Since 1991 we have chosen this direction of building a state which is based on democracy, human rights and freedom”, FM Zohrab Mnatsakanyan said.

At the end of the meeting the minister answered numerous questions of the community representatives.