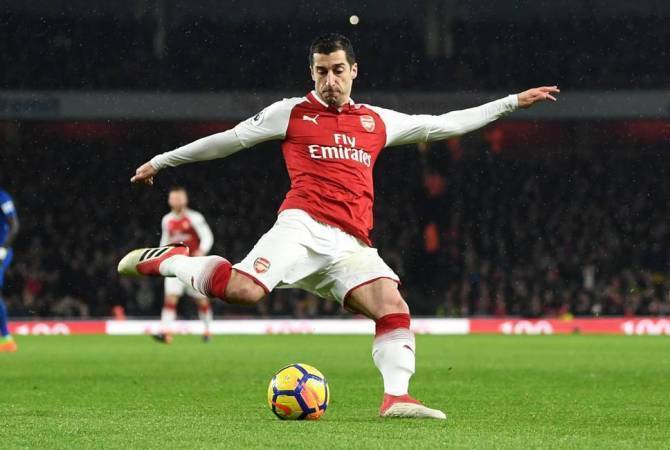 
YEREVAN, MAY 22, ARMENPRESS. The news that Henrikh Mkhitaryan will miss the Arsenal vs. Chelsea Europa League final in Baku has caused some pretty heavy uproar in the worldwide press.

Arsenal confirmed on May 21 that the Armenian football star will not travel with the Gunners to Azerbaijan due to safety concerns, referring to the NK conflict.

Arsenal manager Unai Emery has said he respects Henrikh Mkhitaryan’s decision not to play in the Europa League final but conceded it is ‘bad news’ for his side. Teammate Alex Iwobi added that it is ‘very upsetting’ Mkhitaryan will miss out of the opportunity to guarantee Arsenal a spot in the Champions League, but added: ‘We’re going to fight and hopefully win the trophy, not just for us but for him,” according to The Guardian.

CNN reported the matter, emphasizing that Mkhitaryan will be left behind by Arsenal due to security reasons. CNN also wrote about the reason of these security concerns – the Nagorno Karabakh conflict between Armenia and Azerbaijan.

“It's the second time this season that Arsenal has left the 30-year-old out of its squad for political reasons. During the group stages last year, Mkhitaryan didn't travel with the team to play against Qarabag”, CNN said.

The London club said it was "disappointed" to announce the midfielder would not travel with the squad for the May 29 final against English Premier League rivals Chelsea, but made the final decision after discussions with him and his family.

Arsenal confirmed it has written to UEFA, European football's governing body, to express its "deep concerns".

"Micki [Mkhitaryan] has been a key player in our run to the final so this is a big loss for us from a team perspective," read a club statement.

"We're also very sad that a player will miss out on a major European final in circumstances such as this, as it is something that comes along very rarely in a footballer's career.

"Micki will continue to be part of our preparations until we depart for Baku at the weekend."

Mkhitaryan, who won the Europa League with Manchester United in 2017, tweeted that to miss the final against Chelsea "hurt a lot."

In response, UEFA said in a statement: "Working alongside Arsenal FC, UEFA sought and received assurances regarding the player's safety in Azerbaijan from the highest authorities in the country.

"As a result of these guarantees, a comprehensive security plan was developed and given to the club.

"While the club acknowledges the efforts that UEFA and the Azeri government have gone to in this matter, we respect the personal decision not to travel with the player."

However, CNN reminded that this isn’t the first time that a player is being left at home for political reasons.

“Liverpool omitted Xherdan Shaqiri from its squad to face Red Star Belgrade earlier this season”, the article said, referring to tensions between Serbia and Kosovo.

“The footballer caught up in Armenia’s conflict with Azerbaijan” – this is the headline The Economist reported the news with.

“HENRIKH MKHITARYAN is no ordinary Armenian. At 30 years of age, he has won the “Armenian Footballer of the Year” award a record eight times. He captains his country’s national team, and has played for some of Europe’s biggest clubs.

Yet, despite such credentials, “Micki” (pictured above) finds himself caught up in Armenia’s ongoing conflict with Azerbaijan, its neighbor. He will not play in the Europa League final on May 29th, when his current team, Arsenal, play another London side, Chelsea, in Baku, Azerbaijan’s capital. Both club and player made the decision, seemingly due to fears over his safety. Arsenal said the club had not received “acceptable guarantees” from UEFA, the governing body of European football, that it would be safe for Mr Mkhitaryan to travel, and they have now taken matters into their own hands”, The Economist says in the article, noting that the decision has angered the club and fans “who were already incensed with UEFA’s decision, after a bidding process by member states, to host the event in Azerbaijan. Baku is further east than Baghdad, and the club, like Chelsea, is being allocated just 6,000 tickets for a stadium that holds more than 68,000 people. But Mr Mkhitaryan’s situation is also a reminder that a little-known political rivalry is still tense.”

The situation surrounding Arsenal leaving behind Mkhitaryan due to political reasons has angered numerous sports commentators, analysts and fans across the world.

Dozens of sports journalists have expressed discontent via social media.

In a sign of support to Mkhitaryan, Russian sports commentator Vasily Utkin returned his airplane ticket to Baku, where he was planning to travel to view the match.

British TV host and journalist Piers Morgan also suggested the two finalist teams should boycott the match. “You have many Armenian fans, Chelsea FC - are you going to stand by & do nothing about this Henrikh Mkhitaryan situation?????? If both teams refuse to play in Baku, UEFA will have to move the game”, Morgan tweeted on May 21.  “Substitute 'Messi' or 'Ronaldo' for 'Mkhitaryan' - still think we'd even be having this debate? UEFA would move the final.”

Earlier on May 21, the Armenian Ministry of Foreign Affairs had also commented on the situation around Mkhitaryan.

It described Azerbaijan’s failure to provide sufficient security guarantees as well as banning the entry of fans of presumably Armenian descent as “a new manifestation of racism”.