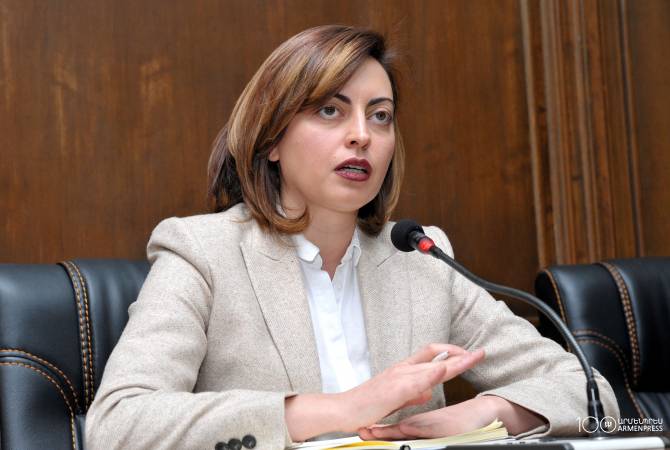 
YEREVAN, MAY 20, ARMENPRESS. Vice Speaker of Parliament of Armenia Lena Nazaryan calls on citizens who blocked the courthouses across the country to show respect to courts and their staffs.

“After the revolution the judiciary in Armenia has operated without the government’s interference and influence over the past one year. This one year was the period during which the judiciary should have reacted to the ongoing democratic process in Armenia. It should have revealed the shortcomings of the system, refused from old traditions and practice. It should have got rid of the corrupted judges who are linked with the old system for personal interests. And it should have started forming a really independent judicial power in Armenia. But this didn’t take place. The judicial system didn’t react to the people’s demands and principles of democracy and human rights brought by the revolution. Courts remain unreliable for all sides without an exception, this mistrust creates crisis.

With today’s democratic campaign we want the courts and the entire judicial system to face the fact that democracy is irreversible in Armenia, feel bound to react to our country’s changes with real and deep reforms. I expect this campaign will awaken the judges and will force the judiciary to make serious reforms.

I also call on citizens participating in the campaign to show respect to courts and their staffs, not to commit any act of disorder or succumb to provocation.

We are building an Armenia where democracy and human rights are a priority, where violence, corruption and injustice have no place”, Lena Nazaryan said on Facebook.

On May 19 Prime Minister of Armenia Nikol Pashinyan called on citizens to block the courthouses across the country starting from May 20 early morning.

The PM also announced that he is going to address the nation at 12:00 in a live broadcast.