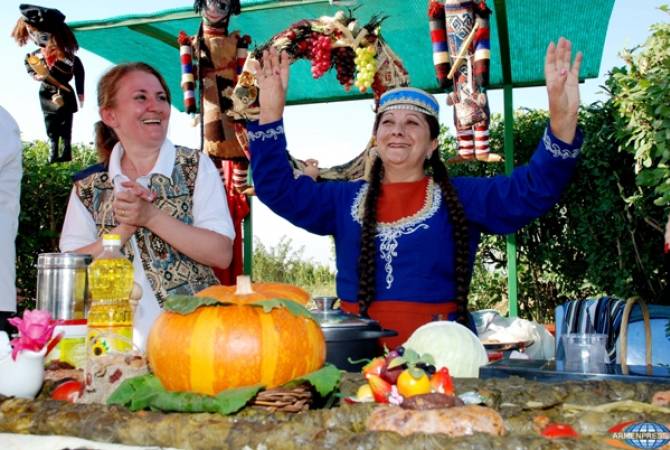 
YEREVAN, MAY 17, ARMENPRESS. The IX International Dolma Festival will be held May 19th at the Zvartnots Cathedral in Armenia.

The 7th century cathedral, now in ruins, will attach cultural significance to experiencing the taste of the trademark dish of the Armenian cuisine.

Master Chef Sedrak Mamulyan, the President of the Development and Preservation of Armenian Culinary Traditions NGO, told reporters that the festival has serious promotion significance and seeks to boost tourism.

“National cuisine is our cultural heritage, and we have a very very presentable cuisine,” he said. “It is important for us that many tourists visit Armenia to participate in the Dolma festival,” he added, noting that 35 pavilions will be represented during the event.

A dolma festival will also be held in Buryatia, a federal subject of Russia. “Seeing how the festival is organized in Armenia, I spoke with Sedrak Mamulyan to organize this festival in Buryatia. Our goal is to unite different nations through culture and cuisine,” said Yervand Kalachyan, Head of the Association of Chefs of Buryatia.

The IX International Dolma Festival will feature a number of restaurants of Armenia, individuals, NGOs and other public food services.

Cooks from the military will also take part in the event this year.

Mamulyan’s NGO initiated the festival in 2011.