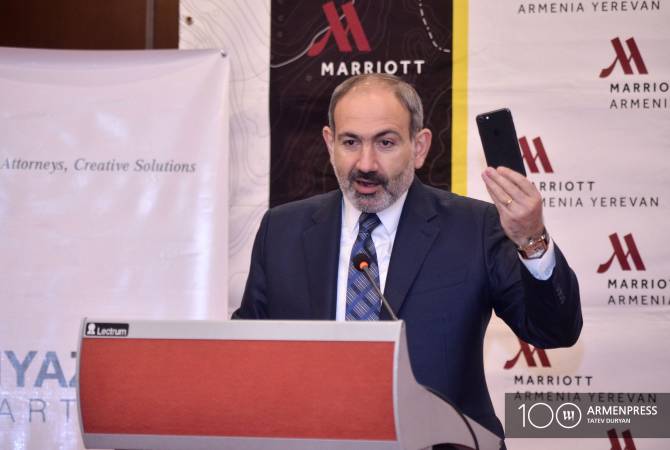 
YEREVAN, APRIL 26, ARMENPRESS. Armenian Prime Minister Nikol Pashinyan attaches more importance to having an idea, a thinking, rather than oil, gas, gold in the country. He states that there is no greater resource than human mind, reports Armenpress.

“In the contemporary world, intellectual property and its protection are one of the most urgent and most discussed topics. The developments of the last century led to the point that the intellectual property is more important and valuable than the material property. And this is the reason that today at all formats, all summits and inter-state meetings touch upon the issue of the protection of intellectual property. This doesn’t only relate to the creative, art sector, but it covers everything because there is nothing more expensive than the idea. The problem with the intellectual property is in full accordance with the ideology based on which changes have taken place in Armenia. Nothing can happen in reality which hasn’t yet taken place in our mind. Anything that surrounds us is a reality, exists physically, it firstly existed in our mind starting from art up to high technological events”, the PM said during a conference in Yerevan dedicated to the World Intellectual Property Day.

Pashinyan stated that the intellectual property protection is also very important for carrying out an economic revolution in Armenia. He noted that creation is no longer an art only, but anything, any economic activity first of all is a creation, including the public administration. The PM attached importance to this Day and stated that the protection of the intellectual property should be a priority for the government.

“While looking at the structure of the world economy we will see that the modern economy is completely based on the intellectual property. Computer, internet, the latest technologies didn’t exist in somewhere, they have been created thanks to the human mind and work. And when we say an economic revolution, we first of all mean this. The times where having oil, gas, gold were important have passed. Today’s issue is the following: whether we have a mind, an idea and ability of intellectual work or not. We record that there is no greater resource than the human mind, there is no greater power than the human creation, there is no greater potential than the human courage which is also a very important tool”, the PM said, adding that the victory process of the Armenian people will be continuous.

He expressed confidence that Armenia today has enough potential to create intellectual wealth and put the country’s security, welfare and future on this intellectual treasury.