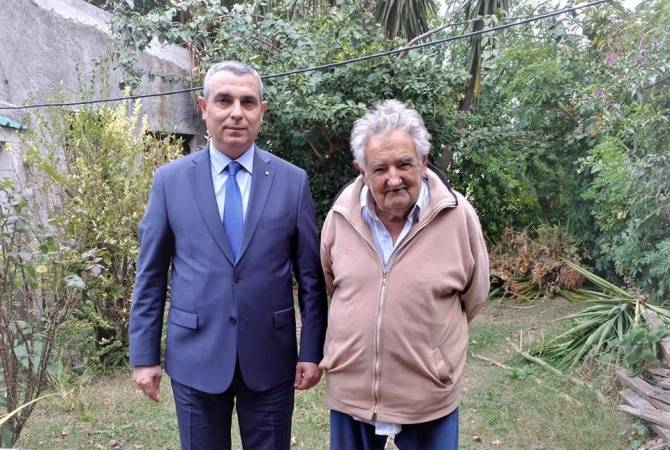 
STEPANAKERT, APRIL 24, ARMENPRESS. Foreign Affairs of the Republic of Artsakh Masis Mayilian arrived in the capital city of the Oriental Republic of Uruguay, Montevideo, on April 23 at the invitation of the Armenian National Committee of Uruguay, the Artsakh MFA told Armenpress.

On the first day of the visit, Masis Mayilian met with former President of Uruguay, one of the leaders of the country's ruling political coalition Jose Mujica.

During the meeting, the Foreign Minister highly appreciated the traditionally friendly attitude of President Mujica and the Uruguayan authorities towards Armenians.

Briefing on the process of state-building in Artsakh, Masis Mayilian noted that the peoples of Artsakh and Uruguay share a common value system.

At the request of President Mujica, the Foreign Minister touched upon the prospects of the international recognition of the Republic of Artsakh, the history of the Azerbaijan-Karabakh conflict and the recent developments in the peace settlement process.

Representative of the Artsakh Central Committee of the ARF Dashnaktsutyun, member of the Parliament of the Republic of Artsakh David Ishkhanyan, member of the Central Council of the Hay Dat of the ARF Dashnaktsutyun, Vice President of the Socialist International Mario Nalbandian, and Permanent Representative of the Republic of Artsakh to the USA Robert Avetisyan participated in the meeting.