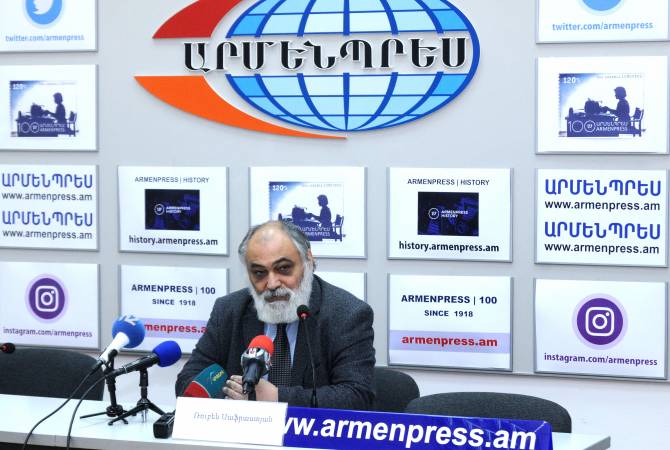 
YEREVAN, APRIL 22, ARMENPRESS. The atmosphere of fear formed in Turkey recently impacts the truthful word about the Armenian Genocide, Director of the Oriental Institute of the National Academy of Sciences of Armenia, expert on Turkish studies, Ruben Safrastyan, told a press conference in ARMENPRESS. He stated that years before speaking free about the Armenian Genocide was happening more often than recently. Safrastyan said following the 2016 coup attempt in Turkey, President Erdogan further strengthened his sole power in the country, as well as the pressures on various layers of the Turkish society.

“This atmosphere of fear, which further developed in Turkey, also affects the truthful remarks on the Armenian Genocide which we were witnessing in recent years. Unfortunately, the voice of the courageous representatives of the Turkish society, which were trying to tell a truth on the Armenian Genocide, is now weaker”, the expert said.

According to him, this trend will not only be maintained in Turkey, but will further intensify because Erdogan’s policy, which is based on pressures, is gradually being strengthened. An atmosphere is being formed in Turkey with the goal to silence the society.

Commenting on the activation of the Armenian Genocide recognition by different countries, Ruben Safrastyan said it’s necessary to try to understand what stands behind this activeness.

“Usually this activeness is seen when the relations of that country and Turkey are in tense situation. At the same time we should not ignore the fact that the recognition process of the Armenian Genocide is not only an issue of bilateral relations, but also prevention of genocides”, he said.

The expert on Turkish studies added that in the recent period the issue of the recognition of Armenian Genocide seems moves to the Muslim world. Speaking about this fact by some Arab countries proves this. Safrastyan expressed hope that the Muslim world will stand above the idea of having religious commonality with Turkey and will really touch upon this grave crime against humanity.

As for what must be the strategy of Armenia and its people, the expert said the issue of reparation must be put on more consistent and well-grounded manner.

“Genocide is a grave crime, and the perpetrator must be punished. Currently this is possible by demanding reparation. First of all, it is necessary to thoroughly study all legal issues, select rightly the convenient political moment and push forward the issue of the reparation”, he added.