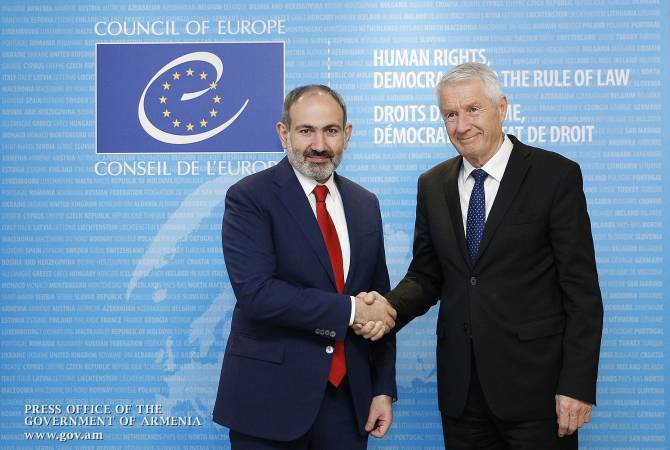 
YEREVAN, APRIL 11, ARMENPRESS. Armenian Prime Minister Nikol Pashinyan met with Secretary General of the Council of Europe Thorbjørn Jagland on the sidelines of his working visit in Strasbourg, the PM’s Office told Armenpress.

Before the meeting Pashinyan left a not in the CoE’s Golden Book.

During the meeting the CoE Secretary General welcomed the democratic changes that launched in Armenia last year. He stated that the holding and results of the December 9 snap parliamentary elections show the dedication of the Armenian people to democracy and human rights, and the Council of Europe will continue to cooperate with the Armenian government to achieve these goals.

PM Pashinyan expressed gratitude to the CoE Secretary General for supporting Armenia’s democratic processes and highly valued his personal contribution to the effective implementation of the CoE activity and raising its reputation. According to Pashinyan, the CoE is a key partner for Armenia.

Nikol Pashinyan and Thorbjørn Jagland discussed issues on deepening the Armenia-CoE mutual partnership. The Armenian PM stated that democracy is an internal belief and a value for Armenia and its people, but not a foreign orientation, and Armenia will consistently move forward to strengthen it and ensure human rights and rule of law.

Thorbjørn Jagland also attached importance to the reforms aimed at strengthening democracy in Armenia, as a CoE member state, noting that the ongoing processes in the country prove that Armenia and its people are committed to the European values, and the CoE is ready to continue supporting Armenia on this matter.

The officials also exchanged views on the Nagorno Karabakh conflict settlement issue and the regional developments.

After the meeting Pashinyan and Jagland held a joint press conference with reporters.