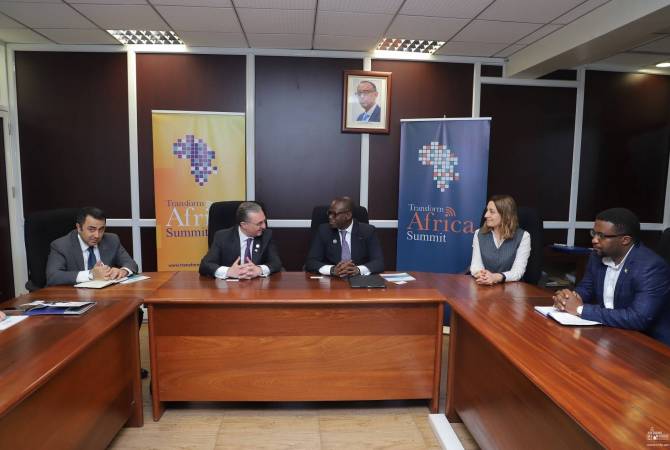 
YEREVAN, APRIL 8, ARMENPRESS. Minister of Foreign Affairs of Armenia Zohrab Mnatsakanyan visited on April 7 the Smart Africa Center during an official visit to Rwanda, the foreign ministry said in a news release.

Smart Africa, created by heads of state and government of African countries, unites 25 countries from the continent and seeks to ensure sustainable socio-economic development, and creation of an economy based on digital agenda and innovations.

At the center, Mnatsakanyan had a meeting with Smart Africa Director General Lacina Kone. Kone briefed the Armenian FM on their achievements and ongoing projects.

In turn, Mnatsakanyan presented the smart development agenda adopted by the Armenian government. The sides also discussed cooperation and possibilities of including the Armenian practice in the African continent.

A MoU was signed between the Enterprise Incubator Foundation of Armenia and Smart Africa. The document envisages implementation of joint innovative and research projects, cooperation in high tech and engineering sectors, encouraging ties between universities and partnership between business circles between Armenia and Rwanda.

The Armenian FM also presented the preparations for the upcoming WCIT congress due in October in Yerevan, Armenia.