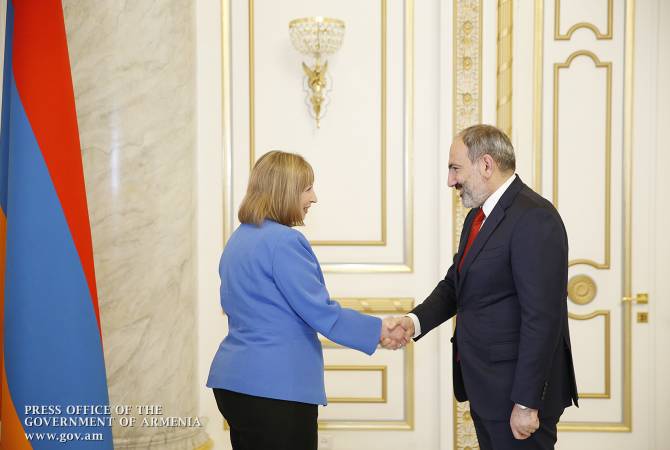 ARMENPRESS was informed from the Office of the Prime Minister of Armenia, Nikol Pashinyan welcomed Lynne Tracy, congratulated her on the appointment and wished her success in the diplomatic mission. The PM emphasized that the Armenian Government highlights the continuous development and expansion of partnership with the USA, including in political and economic spheres. The Head of the Executive noted that Armenia confidently moves in the direction of development and strengthening of democracy, fight against corruption and monopolies, protection of human rights and freedom of speech and underlined the cooperation with the USA in the mentioned direction.

Thankful for the warm welcome, Lynne Tracy said she was honored to meet with Prime Minister Pashinyan and reaffirmed the U.S. Government’s strong commitment to assisting sovereign Armenia in implementing its democratic agenda and anti-corruption efforts, dealing with economic and regional bottlenecks, as well as in matters of international security. The U.S. Ambassador assured that during her tenure she would make all necessary efforts to promote the development of bilateral economic cooperation.

During the meeting, the parties discussed a number of issues on the agenda of the Armenian-American relations. Nikol Pashinyan and Lynne Tracy exchanged views on the Nagorno-Karabakh conflict settlement process and other regional issues of mutual interest.