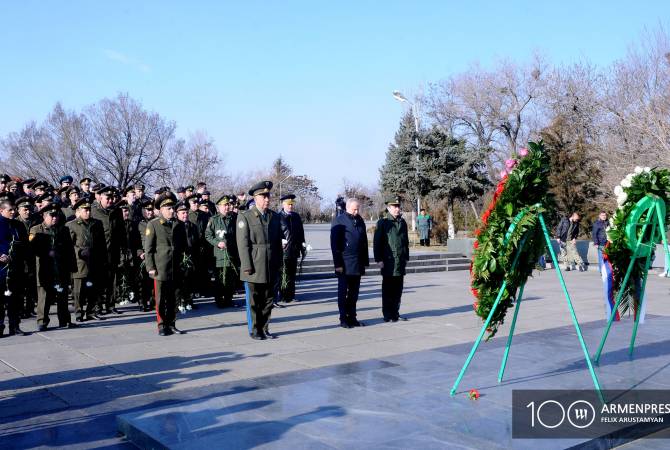 
YEREVAN, FEBRUARY 23, ARMENPRESS. On the occasion of Fatherland Defender's Day a solemn ceremony was held in Yerevan Victory Park, attended by Russian Ambassador to Armenia Sergey Kopirkin, high ranking officers of the Armenian and Russian armed forces, servicemen and veterans of the Great Patriotic War. The present laid wreaths and flowers at the Unknown Soldier's Memorial, paying tribute to the memory of the victims of the homeland defense.

ARMENPRESS reports Ambassador of Russia to Armenia Sergey Kopirkin addressed his congratulatory message to all the people who are on duty protecting their motherland. The Ambassador emphasized that the peoples of Russian and Armenia have centuries-old history of close interactions, and closely cooperated in numerous historical episodes. The Armenian soldiers had a great contribution to the victories of the Soviet era and the development of the armed forces.

'The cooperation of the two allied states, Armenia and Russia, is the security guarantee of our countries, as well as the region”, the Ambassador said.