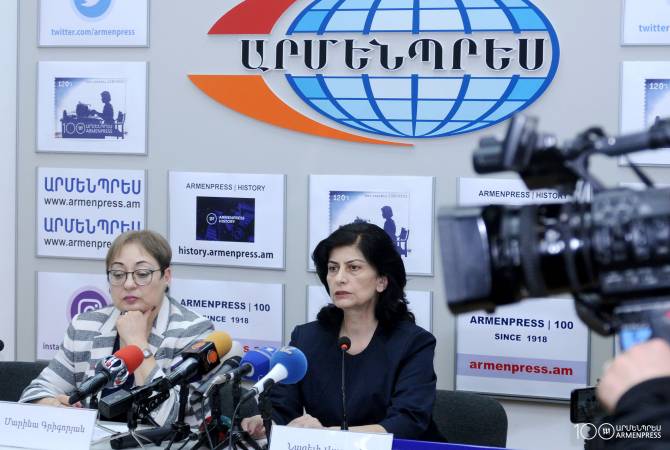 
YEREVAN, FEBRUARY 19, ARMENPRESS. The crime committed against Armenian officer Gurgen Margaryan in Budapest, in 2004, was Azerbaijani President Ilham Aliyev’s first message to the world what policy he is going to run and what are his plans, Marina Grigoryan – Ordinary Genocide project manager, told a press conference in ARMENPRESS.

“That crime proved that Aliyev’s plan was to make Armenophobia a state policy of Azerbaijan. All actions which took place shortly after this incident, such as the trial of Ramil Safarov who killed Margaryan with an axe, his extradition, as well as the ongoing actions show that Aliyev is consistently carrying out that policy”, she said.

Grigoryan said that crime has been organized at the state level and was Aliyev’s state order to Ramil Safarov. “This was proved in the first days when Safarov gave his first testimony.

“He said everything very frankly, and the other Azerbaijani participant Anar Aliyev has confirmed what he said. After the incident Safarov told his partner to go to Baku and state that he has done what he had to do. This exists in the official document, as well as in the materials of the judicial case”, she said.

Grigoryan said Azerbaijan is responsible for the murder of Gurgen Margaryan.

Lawyer Nazeli Vardanyan said the interference at the state level during that years, the opening of embassy in Hungary, the influence on expertise, releasing Safarov after extradition was a planned operation.

“It’s obvious that there is a state order here. When you examine Safarov’s activity, you see that he has been a prospective officer. He has graduated from a college in Baku, continued studies in Turkey, participated in the military drills in Northern Cyprus and was sent to Hungary to learn English”, she said.

15 years have passed since the murder of Armenian officer Gurgen Margaryan, who was brutally killed by Azerbaijani criminal Ramil Safarov.

On January 11, 2004, Gurgen Margaryan left for Budapest, Hungary, to participate in a three-month English language course which was part of NATO's Partnership for Peace program. On February 19 he was axed, while asleep, by his fellow Azerbaijani participant, Lieutenant Ramil Safarov. The murder took place at 5 am, while the victim was asleep.

Safarov, who was sentenced to life imprisonment, was transferred back to his home country on August 31, 2012 under an extradition agreement. Although Azerbaijan formally pledged that the life sentence handed down to him in Hungary would be directly continued when he was returned to his homeland, the Azerbaijani president granted him a pardon and formally recognized him as a “national hero” upon his arrival.